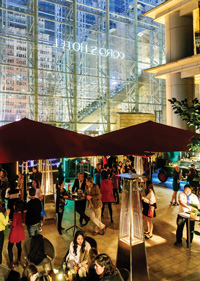 Hailing from Moscow, CulinaryOn is a culinary entertainment studio which provides a culinary experience that goes beyond a typical cooking class. Similarly, at its Singapore outpost, the venue cooks up an exuberant party atmosphere while offering participants the taste of international cuisines, whipped up through fun methods of cooking.

Concept Before participants begin the three-hour cooking class, they first get to tuck into a fine selection of canapes prepared by the studioâ€™s chefs. It is also a time for them to meet and socialise with their fellow participants.

There are various types of cooking activities on offer, for example, the Power Pasta challenge. Teams have to compete against each other to create and cook the longest pasta from scratch. They will also be tasked to whip up a dessert, where the most creative design will win; extra points will be given for personalisation and originality.

MICE application Sprawled across 650m2, this venue comes with a conference room, four separate spaces with 16 cooking stations, four chef tables and well-equipped bars. The event areas can also be combined to accommodate up to 200 guests.Â

CulinaryOn also provides a professional photographer to capture teambuilding memories, the option to print aprons with customised logos, as well as a disco with their in-house DJ to further hype up the atmosphere.

Service It was refreshing to see how their menu of active cooking games truly challenged a team to fully explore our creative ability. It also â€śforcesâ€ť everyone to work together, instead of having the participants come together for just another normal cooking exercise.

The gregarious chefs who accompanied us on the challenge were professional and ever so encouraging which was enough to get everyone â€“ experienced or not â€“ excited and competitive to fight for the winning chef hat.