Andy Sharpe, founder & CEO of global people engagement company SongDivision, strongly believes in the benefits of coming together to create music, and is using it to bring teams together both in-person and virtually 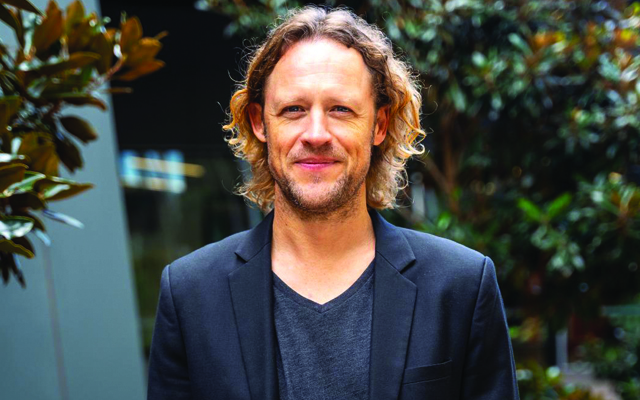 Those who know your work are huge fans. What’s the origin story of SongDivision, which must have something to do with your personal story?
So way back in high school in Sydney I was in a rock band and in our minds, we were going to be the biggest band in the world like U2. We got signed by ACDC’s label over in the UK and we spent four years during the whole Britpop, Oasis craze in the nineties.

When that band broke up, I came back to Australia and ended up working for IBM in their global financing division. That was what you might call a very sharp turn. But it was a wonderful experience. They put me through an MBA and that’s where I got all my corporate experience, and worked in Sydney and New York.   During that time at IBM, I was still writing songs for pop stars in Australia on the side. So I never stopped being a musician.

There’s a famous Australian indigenous band called Yothu Yindi, which put on an amazing festival in Arnhem land in the north of Australia called Garma. And as part of that festival, they would usually invite famous singer-songwriters. People like Neil Finn from Crowded House, for example. The famous musician would run songwriting workshops with the indigenous kids, produce a song in a couple of hours and then perform it at the festival that night.

Well, one of those years a famous Australian musician couldn’t go. So they asked me and it was an amazing experience where I’d get 15 teenagers to write an original song in about 90 minutes. I was petrified but we incorporated their stories and made it really special for them. We did that for two weeks with different groups each day. I could see that transformation that took strangers through a music creation process, and I ended up with a unified, energised group who’ve had this amazing experience together.   When I came back to Sydney, companies started asking me to do that with their sales teams as a teambuilding event. So that’s where the business started.

Tell us a bit about taking someone from feeling intimidated about this whole idea of writing and performing music to becoming a fan of this process.
The first thing that we do is we tell people they don’t have to sing on their own. When you go to a show and there’s a comedian, and you’re worried that the comedian’s going to pick you out of the crowd and you don’t want to be that person.

Our business is infused with that empathy and we don’t want to make people feel uncomfortable. So the first thing that we say is, no one’s going to have to sing on their own. But there are always a few in the group who are desperate to sing on their own too.   The main focus of the songwriting is on the lyrics.

Our work is predominantly with corporate Fortune 500s, and they’re writing about their company’s core values, their purpose, what’s meaningful to them and to their company, where they’re going and where they’ve been. They’re writing about what they’re experiencing in the work environment. By the time they’ve written these poems and one of our musicians sings those lyrics, they’re like: “Oh my goodness. They were my words and I just heard this amazing musician sing them.” You can really feel the magic in the room.

We’ve done a lot of work across Asia too and to answer your question, by the time they perform the song as a group – which is what we did for KPMG’s new managers conference in Ho Chi Minh, where you have groups from across Asia including Thailand, Japan, South Korea, at the start, they can be very hesitant and shy – but when it came to performing the song at the gala dinner, we were worried that we couldn’t keep them off the stage. Some of the groups that were supposed to catch a flight back to Tokyo even changed their flights because they insisted on performing the song.

Are the dynamics different between small and large groups? Are you still getting those outcomes whether it’s a group of 10 versus a group of 10,000?
Yeah, they’re different. So taking 15 senior executives into a recording studio as part of their strategic planning session and them writing a song about where they’re going in the next 10 years is very different to 100,000 people online, which we did for Salesforce’s big Dreamforce event, which is different to a 400 person sales kick-off at a hotel, which is different to so many other types of events.

In the end, people connecting with each other is something that we do with everyone. One of the first things we’ll do is ask people what was the first concert they went to? If they’re online they can just type it in the chat box. Or if it’s in-person, they’ll turn to the person next to them and ask the question.

It’s a really simple ice breaker and you get everything from: “I went to the BTS concert online” or we’ve had people who saw the Beatles at Shea stadium in New York. It’s an objective question and it crosses generations.  With a group of 20,000 people, not everyone is speaking at the microphone, not everyone’s lyrics makes it to the final song, but the way we designed it is that they’re spending some time to reflect on why they’re there, what the key topics are, have a go at writing some lyrics, and they might be sharing it through a breakout on zoom or on a microphone in a conference.

But they’ve spent some time out of their day-to-day work tasks thinking about the bigger picture of why they’re doing what they do, where they are as an organisation, and where they’re going. That’s what we’re aiming for.

What do you think is the psychology behind how music unites us?
It is both a science at art. Without getting too scientific, when you’re coming into a meeting whether virtual or in-person, people can be a bit guarded. The chemical that is released at these events is cortisol. You get a bit of the fight or flight syndrome. You’re a bit defensive.

But when you create music together, you release oxytocin, which is what’s called the cuddle chemical. It’s how they think humans started to socialise in the first place, like when monkeys are picking fleas off each other, that’s a form of social bonding.

So when you create music, if you sing in a choir or you go through a SongDivision program, you release oxytocin, which is like the antidote to cortisol, and oxytocin puts you in your prefrontal cortex, which is where you have empathy and creativity and all those things you want to do. In creating some music together, we’re scientifically altering people’s moods slightly to put them in a more receptive, constructive situation.

So this is getting people out of their own way, in order to make that connection happen faster, which is what a lot of corporations were seeking to do, especially during Covid.
It’s a catalyst and some people will say, okay, you’re coming in and it’s fun. And then you’re gone, right? That’s how it can look and it’s expensive, and so what’s the point?

I’ve had the business for 20 years and I can’t tell you how many conversations I’ve had with CEOs of companies who have just gone through a big merger and acquisition.  They’ve got difficult change and cultural issues and they’ve come together with two different groups over a four-day meeting to set the future path.

We come in really quickly get people to create music together. They then relax and can have conversations about the future, rather than being paranoid about what the future is going to be, which happens after a merger and acquisition. Today people are moving companies quite quickly.   We are there to build communities with these big companies and make people want to be as part of this community.

We’re not a silver bullet, as in we’re not designing their whole HR platform for them, but we can come in and create a mood where they can have some great conversations which we think is important.

You’ve worked all over the world. Have you observed anything that’s particularly unique about corporate culture in Asia?
I think in America where I’m based, leaders are more used to being in front of their teams admitting they’re not perfect and don’t have all the answers but are willing to work it out together. That’s where our clients in Asia want us to help their leaders. But when we say leaders, it’s not necessarily the C-suite. It’s anyone who leads a team of 10, 15, or 1,500 people.

Traditionally if I’m the best sales person, they make me the sales manager. But it doesn’t necessarily mean you are going to be great at keeping your team together or caring about them. The way to do that, and to establish trust, is to be vulnerable yourself and invite the team to work it out together with you. I think that is where we can really help our Asian clients.

What can we look forward to next with SongDivision?
We’ve just launched our own Leadership Track and we’ve partnered with an amazing English company called Synaptic Potential who are learning and development leaders on the neuroscience side that we were talking about before. That’s a new focus into the HR world, an expansion for us and taking the skills that we’ve learned in the meetings and events world and applying them to the HR world.

Leadership Track is specifically designed for the challenges teams are facing today. It’s been in the works since 2020, when we knew the bonds of teams would be forever shifted. The combination of the power of music and almost 20 years in business with Synaptic Potential’s techniques is like nothing you’ve seen before.