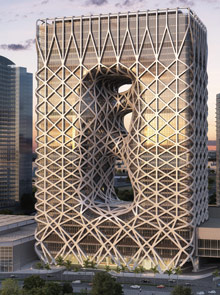 Two years have passed since the last time Macau celebrated a massive injection of new hotel rooms through the opening of the 6,000-key Sands Cotai Central integrated resort.

But from the end of this year, Macau’s tourism players can once again relive that joy with the bumper crop of new integrated resorts expected to come online. According to Macau’s Land, Public Works and Transport Bureau, 16 hotels are under construction and 27 hotel proposals are being evaluated. These projects are expected to add an estimated 25,600 rooms to the destination that is popular with both leisure and business event travellers.

Of the 16 hotels in construction, nine are on the Macau Peninsula and they will add 1,030 rooms to the destination. Taipa will welcome two new-builds with 1,060 rooms.

However, it is Cotai that will provide the bulk of new rooms through five new hotels bearing 7,500 keys. New properties coming up include MGM Cotai, The Parisian, Macao Studio City and SJM Casino Resort & Theme Park.

MGM Cotai, occupying a 71,883m2 site, will boast some 1,600 rooms once it is completed in early-2016. More than 85 per cent of the hotel’s gross floor area is dedicated to non-gaming offerings such as event and banquet spaces, restaurants, retail, spa and entertainment.

Also coming online in 2016 is Wynn Palace, an integrated resort with 1,700 rooms, meeting spaces, a performance lake, a casino, a spa, retail offerings, and F&B outlets.

Meanwhile, the existing Galaxy Macau integrated resort, which houses Banyan Tree Macau, Hotel Okura Macau and Galaxy Hotel, is embarking on its phase two expansion. Targeting completion in mid-2015, the extension will feature The Ritz-Carlton’s first all-suite hotel and the world’s largest JW Marriott, as well as meeting facilities for more than 2,000 guests, and more than 45 restaurants, cafes, bars and lounges.

Galaxy Macau will begin construction of phases three and four as early as late-2014.

City of Dreams is another existing integrated resort to go on an expansion blitz. Its developer, Melco Crown Entertainment, has revealed the design of the property’s fifth hotel tower, a masterpiece of renowned architect Zaha Hadid. The visually stunning, 40-floor hotel will offer some 780 rooms, suites and villas that promise to exceed five-star standards when it opens in 2017.

Sociedade de Jogos de Macau (SJM), which owns Grand Lisboa Hotel and Sofitel Macau at Ponte 16, is also taking its presence beyond the Macau Peninsula by building the Lisboa Palace in Cotai. More than 90 per cent of the total site will be used for non-gaming facilities such as 2,000 hotel rooms spread over The Lisboa Palace Hotel, Palazzo Versace Macau and another fashion-branded luxury hotel.

Commenting on the wave of new hotels, MGM Macau executive director of sales & guest service/hotel operations, Irene Wong, said: “Competition will intensify but we expect demand to remain strong. The transportation infrastructure of Macau will be significantly improved by 2016 (through the new Hong Kong-Zhuhai-Macau Bridge, expansion of the Macau International Airport, and additions of new facilities at the border gates), and that will attract even more regional travellers to Macau.

“From the hotel perspective, we will dedicate our resources to developing non-gaming offerings to diversify our client base.”

Welcoming the slew of hotel developments is SmallWorld Experience executive director, Bruno Simoes, who is often faced with the difficulty of securing more than 50 rooms from a single hotel for his meeting clients, as most hotels give accommodation priority to their gaming and leisure guests.

“However, these upcoming new developments will have meeting facilities, and that is a positive sign for (event planners),” Simoes said.

A magnet for mega business events

This September alone The Venetian Macao will play host to two massive events that will each draw more than 10,000 attendees. One will be the HERBALIFE Active World Team University 2014, an annual training event for the company’s distributors in Asia-Pacific, while the other is the Jeunesse Expo Annual World Conference.

The integrated resort’s spokesperson told TTGmice that the Cotai Expo halls will be used for arrivals and departures, while Cotai Arena will be used for the main event. Meeting rooms at the property will support the rest of the event requirements for smaller gatherings.

All rooms across The Venetian Macao and Sands Cotai Central will be utilised to accommodate the delegates.

The spokesperson said: “We are equipped to handle multiple events of (such scale) every month. This is what we were designed to do as an integrated resort.”

The spokesperson noted that more organisations, from companies to associations, are now hosting large-scale events.

“Organisers understand that with the number of hotel rooms (and event spaces) we have, they can hold their event, along with arrival and departure from Macau, all under one roof. It is hard to find such a venue, especially one that provides such level of service anywhere in the world, so the more of such events we do, the more the word gets out to other markets,” said the spokesperson.

Simon Leung, general manager, Macau MICE Travel of Shun Tak Travel Services, has observed a leap in the size of events coming into Macau.
He said: “More mega events are happening in Macau these days. In the past, we would see groups of 3,000 pax. Today, that has grown to 10,000 to 20,000, with most annual conferences going to The Venetian Macao.”

And the future is bright for Macau in Leung’s point of view. “I foresee more of such large-scale events when new hotels and integrated resorts are completed in the next few years,” he added.

However, Darren Chuckry, client services, executive director of Uniplan Hong Kong, thinks that Macau has yet to achieve its full potential as a destination for mega events.

According to Chuckry, Uniplan Hong Kong’s largest event in the destination was the three-day G2E Asia global gaming expo last year, which drew 6,500 professional visitors and 130 exhibitors from around the world.

“(But) I believe that the completion of the Hong Kong-Zhuhai-Macau Bridge and new developments in Cotai will definitely heighten interest in Macau as a host city for mega events,” said Chuckry.

He added: “Still, the city needs improvement in two areas to sustain the growth of its mega events industry – it has to improve (access to Macau) and allow for more flexible hiring of crew members. Currently most organisers and visitors choose to fly into Hong Kong then take the ferry to Macau. Organisers are also required to hire only local crew members to support their events.

“Diversifying the variety of entertainment options and lifestyle destinations in the city would play a critical role in establishing Macau as a world-class entertainment hub in its own right.”  – Prudence Lui

A new environment to rest and recharge The Spa at Wynn, located within Wynn Macau, has unveiled a new look to offer guests a sense of “lightness and openness” right from the moment they enter. The soothing effect is a result of caramel and cream carpets, refreshed limed oak woodwork and exquisite lanterns.

Complementing the new look is a new 90-minute signature Silk & Cashmere Awakening treatment, which includes a purifying exfoliation and a light massage using warm silk gloves, followed by a deeper full-body massage using warmed lotus oil, and a luxurious application of a cashmere-infused silky body wrap. The treatment concludes with a rare and refined body cream of lotus flower extract and shea butter for an illuminated glow.

Explore Macau on your own

Business event travellers to Macau who are planning to extend their stay and explore the destination at their own pace can now rely on the new Macao Cultural and Creative Map and complementing mobile app.

Designed to guide tourists to Macau’s cultural and creative spaces, the first edition of the map covers the destination’s seven parishes, introducing each with text and animations. Additional information on World Heritage sites, museums and bus routes are also available. Location services on the mobile app help guide users to even more products and activities.

Sofitel Macau At Ponte 16 has launched Le Chinois Cantonese Restaurant on its top floor, allowing guests to not only feast on delicacies created by chef Ho Wah but also take in the sights of Macau’s inner harbour.