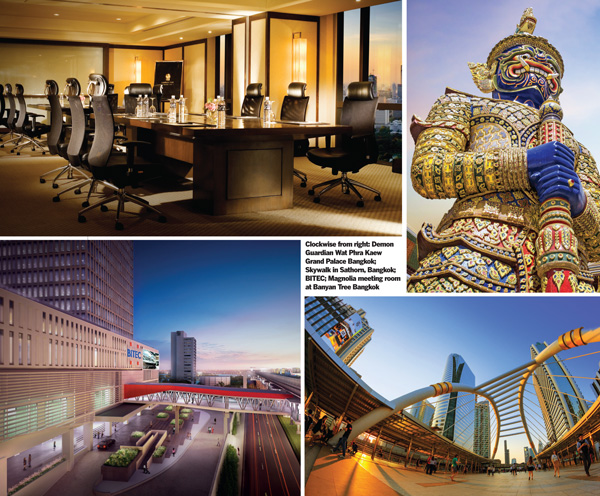 Bangkok is replete with business event venues and hotels but still tantalises with new and improved hardware. By Michael Sanderson

All eyes will be on the Bangkok International Trade and Exhibition Centre (BITEC) next month as its US$170 million expansion is put to the test with the heavy duty Grand Metalex 2016, a Machine Tool & Metalworking Technology Expo.

The expansion nearly doubles the 19-year-old venue, with three new event halls bringing the total exhibition space to 70,000m2, making it one of AsiaŌĆÖs largest and a formidable growth catalyst for BangkokŌĆÖs conventions and exhibitions sector.

Complementing the event halls are three convention halls, 12 meeting rooms, a visitor centre, VIP rooms and the launch of Bhiraj Tower at BITEC, a mixed-use office building with retail, dining and entertainment facilities.

Panittha said: ŌĆ£One of the key highlights will be an event hall with a 25-metre-high ceiling, which is a standard requirement today for concerts, lifestyle and live entertainment shows as well as large-scale exhibitions and conventions.ŌĆØ

Panittha said: ŌĆ£Getting to and from the venue will be easier with new infrastructure such as a direct link to the BTS station, connecting visitors to all the major attractions and hotels in Bangkok. We will also have three underground levels of parking for over 4,000 cars.ŌĆØ

Investments are being made on BITECŌĆÖs software too, revealed Panittha. She said: ŌĆ£In order to stay ahead, we need to be able to deliver the right information to the right people in the right way. And so, weŌĆÖve developed a greater online presence through our comprehensive and responsive website and various social media channels which are always up-to-date and allow our customers to connect with us using their preferred method.ŌĆØ

Foreign delegates attending events at IMPACT Exhibition and Convention Center also have another fresh accommodation option close by. The 183-key Best Western Plus Wanda Grand Hotel opened in May on Chaeng Wattana Road, a 3.4km drive from the centre. The upscale hotel has nine function spaces, including a 927m2 grand ballroom.

Come 1Q2017, Park Hyatt Bangkok will welcome its first guest. It offers 222 rooms and suites, a selection of F&B venues on the top three floors (35th to 36th), and outdoor terraces with lush gardens.

Exisiting hotels in Bangkok have also been stepping up their game to better compete with the glut of hotels in the city, and Events Travel AsiaŌĆÖs group managing director Max Jantasuwan is particularly impressed with what have emerged.

Pointing to the recently renovated Plaza Ath├®n├®e Bangkok, A Royal M├®ridien Hotel, and new function spaces at the Swiss├┤tel Nai Lert Park Hotel and Banyan Tree Bangkok, as prime examples, Max said these properties ŌĆ£offer something different to what have been done before in Bangkok or ThailandŌĆØ.

He said these properties were getting good responses from his clients.

493,383
The number of business events travellers to Thailand between October 2015 and March 2016, according to the Thailand Convention and Exhibition Bureau (TCEB)

103
The number of international association meetings held in Bangkok last year, according to ICCA, making it the 16th busiest city for such events in the world

Domestic MICE has become a focus under the Thai governmentŌĆÖs State of People policy, with both state and private organisations encouraged to hold inter-provincial meetings and conferences. The domestic MICE market was worth US$1.32 billion in the 2015 fiscal year, and the government hopes to improve on this as part of a strategy to stimulate a stagnant economy

After the Board of Investment rejected the Thai Chamber of CommerceŌĆÖs request for hotel renovation privileges, it remains to be seen whether the idea will have more luck with the Revenue Department in the form of a tax break. As ThailandŌĆÖs hotel rooms outstrip demand, the challenge for older properties is to renovate and modernise to remain competitive.

Thailand is offering special perks and discounts for MICE travellers through the Spice Up Your Business Agenda in Thailand campaign. The Thailand Convention and Exhibition Bureau (TCEB) has teamed up with the government, Thai Airways, Thai Smile and Visa to offer incentives on everything from flights and accommodation to spa treatments, and is targeting the Chinese and CLMV

August saw the introduction of the Thailand Incentives and Meetings Exchange, which TCEB will use as an annual platform for education and sharing experiences. The one-day forum will have a particular marketing focus, with the first centred on the Chinese market.