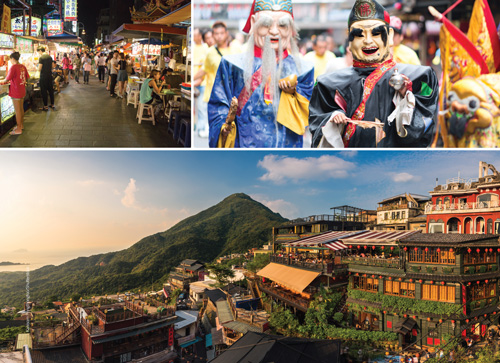 Clockwise from below: A panoramic view of Jiufen; famous street food can be found at the Shilin Night Market; performers at the Dragon Boat Festival

TAITRA and its stakeholders have been diligent in organising forums and initiatives to stay afloat in a choppy economic sea. By Prudence Lui

Despite the current global economic slowdown and e-commerce boom, the meetings segment in Taiwan outdid the other MICE segments in 1H2016, and saw a 37 per cent growth in terms of overseas participants.

On the exhibitions front, results have been healthy in terms of the number of shows held, booths sold, and overseas visitors. However, the incentive travel segment recorded a sharp drop in the number of incentive groups, especially from China.

In light of this, numerous efforts have been undertaken by the Taiwan External Trade Development Council (TAITRA) to stay competitive in the global MICE sector.

Since 2014, TAITRA has been organising the annual Asia Super Team Competition. It is a game where companies go up against each other in online and offline games around Taiwan, and allows participants to experience the countryâ€™s MICE environments. In this yearâ€™s edition, it drew more than 150 corporate entries â€“ 50 more than last year â€“ from companies across Asia-Pacific.

The finalists were seven corporate teams from Japan, South Korea, Singapore, Malaysia, Indonesia, Thailand, Hong Kong and Macau, where each team won a trip to Taiwan from October 3-7. The champion was then awarded a MICE tourism package valued at more than US$50,000.

TAITRAâ€™s executive vice president, Walter Yeh, said: â€śThis yearâ€™s forum was a resounding success thanks to over 600 participants from 17 countries. With the theme The New Era of Experiencing and Sharing, the annual Asian MICE Forum has served as a prime platform for Asian MICE professionals to exchange ideas and trigger cooperation opportunities.â€ť

Although details about the next four-year-long Meet Taiwan MICE promotion programme â€“ due to start in 2017 â€“ were still unknown at press time, Yeh said its features would take into account the viewpoints of local PCOs, PEOs, and MICE associations.

â€śElements might include assisting cities such as Tainan and Taichung which have shown a strong interest in the MICE industry and requested help to construct new convention centres,â€ť he elaborated.

Yeh added: â€śTo attract more international conferences and incentive travel to Taiwan there is a need to integrate all possible central and local government resources, and help raise awareness of local cities. The major incentive travel target markets will include China and other Asian countries, especially those from South-east Asia.â€ť

To this end, Meet Taiwan organised a MICE delegation to run networking events in Vietnam and Malaysia. Meet Taiwan supplements these efforts with participation in MICE tradeshows such as IT&CM Asia in Bangkok.

GIS Group, CEO, Jason Yeh, said: â€śI think it is a good time for Taiwan to develop the ASEAN market, especially Thailand as they can now enter Taiwan visa-free. I can see that there will be more visitors from Thailand, not only as as tourists, but also for corporate meetings and incentives.â€ť

However, GIS Groupâ€™s Yeh addedÂ  that the Meet Taiwan programme had to be more â€śfocused on bidding, and be more proactive in initiating bids and salesâ€ť, because competition in the Asia-Pacific is tough.

K&A Internationalâ€™s president, Kitty Wong, added: â€śTaiwan is small and should focus on a niche market. It should not have just a one-size-fits-all plan. There should be different strategies when approaching different market segments.â€ť

She added that â€ś(business) growth would be slow (in 2017) as there are more second- and third-tier cities joining in (and adding to the competition for MICE)â€ť, and if Taiwan cannot â€ścreate new routes, or activities for incentives, there will be a slim chance of winning business from other emerging citiesâ€ť.

6,100
The number of participants at the 66th Junior Chamber International Asia Pacific Conference in Kaohsiung in June, making it the largest congress in Taiwan this year

40,969
The number of overseas participants involved in Computex Taipei 2016. Held from May 31 to June 4, this is an increase of 4.7 per cent from last year. International visitors hailed from 178 countries, a growth of nine per cent

5,600
The number of participants involved in an event hosted by the Infinitus (China) Company in April, making it the largest incentive group to visit Taiwan this year

The shortage of exhibition spaces is a major bugbear for to Taiwanâ€™s MICE players. But relief will come once Nangang Exhibition Hall 2 is completed in approximately three yearsâ€™ time. Both Nangang Exhibition Halls 1 and 2 will be able to contain 5,000 booths, and meet the demands of large-scale international exhibitions such as Computex and Taipei Cycle.

Further easing the shortage is the governmentâ€™s plan to build new convention centres in Tainan and Taichung in the near future.

The e-commerce boom has caused much concern among PEOs in Taiwan, especially for those with international B2B shows. This is because new technology and business models have changed buyersâ€™ purchasing habits and lowered the demand for booths. To adapt, TAITRA and other PEOs in Taiwan are working to transform and upgrade the content of their exhibitions. The successful transformation of Computex Taipei 2016 into a new platform for IoT applications, business solutions, etc, is a good example. It boosted foreign attendance to excess of 40,000.

The newly elected government has set up a New Southbound Policy that aims to foster cultural, investment, commercial and trade links with ASEAN countries. It will provide new opportunities for the Taiwan MICE industry to enter the ASEAN market. Another national strategic economic policy is to develop five core innovative industries: green energy, biotechnology, smart machinery, national defense and the Asian Silicon Valley. This will create more demand for conferences and exhibitions to help these five strategic industries with acquiring new technology, professionals and trade promotions.