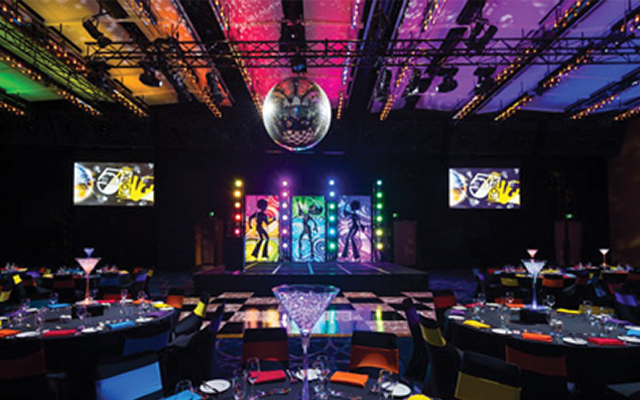 Staging Connections delivers on clientâ€™s order for a 1970s disco party in modern times while highlighting the venueâ€™s world-class technology. By Rebecca Elliott

The event was set to take place at the new Four Points by Sheraton Sydney on July 1, 2016.

The client wanted to return to the heydays of the late-1970s disco era, when parties at the Studio 54 nightclub were all the rage. The client desired a dramatic and colourful celebration that would leave a lasting impression on attendees.

However, to deliver such an elaborate themed event in a hotel ballroom, a combination of audiovisual, staging, styling, theming and lighting equipment was needed.

The Staging Connections team set about designing a creative and colourful event that also highlighted the world-class technology present in the new Grand Ballroom at Four Points by Sheraton Sydney.

Setting the stage for the iconic nightclub vibe was a stylised black and white dancefloor under a 1.5m-wide mirror ball. The set was surrounded by multi-coloured illuminated pieces featuring silhouettes of disco dancers and vertical light towers positioned between them, rising to 4m in height.

To further bring the vision to life, the team installed a projection system consisting of 16,000 lumen Panasonic projectors with motorised screens that framed the stage set. Colourful styling and dramatic lighting created a vibrant atmosphere that was perfect for the lively celebration.

Some 80 Martin Rush MH5 moving profiles were installed to pin spot tables and breakup gobos within the fixtures were used to cast shapes of light throughout the Grand Ballroom.

Bright colours from the LED ceiling panels coupled with sleek black tablecloths and illuminated martini glass centrepieces on top of a light box that oscillated through a rainbow palette of light, all came together to create an upbeat theme.

In addition, disco music set the mood in the pre-function space before guests proceeded down a red carpet to the Grand Ballroom, where the theme of Studio 54 was revealed, much to their delight.

Staging Connections successfully delivered a colourful and vibrant atmosphere for the awards night. By coordinating all styling, theming, lighting and audio, the environment was cohesive, immersive and ensured a memorable theme was crafted.

The client told Staging Connections that guests loved the mirror ball and dance floor, and the party lasted all night, as if the disco era was here again and Studio 54 had come back to life.

Adding to the memorable night was splendid views of Sydneyâ€™s Darling Harbour from the Grand Ballroom.

The event also turned out to be one of the first fully styled gala events to be held the new Four Points by Sheraton Sydney.