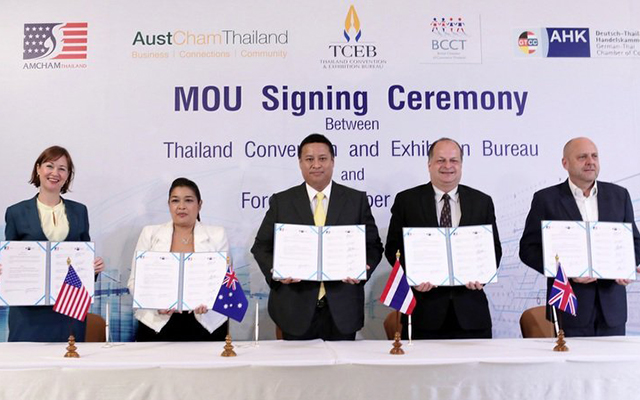 Thailand recently signed an MoU with the FCA (Foreign Chamber Alliance; representing Australia, Germany, US and UK) to push the development of the country’s MICE business in longhaul markets.

Calling these “high potential business groups”, Chiruit believes that they will help propel the national economy as they have already been included among the S-curve targeted industries that the Thai government is eyeing, in line with its 4.0 policy.

This is the very first time that the Foreign Chamber Alliance has signed an MoU with a Thai government agency.

With this MoU, the framework for the development of the business events sector will comprise five areas of operation, including exchanges of statistics and MICE events, MICE business development, MICE market promotion, MICE business research, and MICE personnel development.

TCEB’s next step is to discuss with FCA on the preparation of Phase I work plan, which will last two years.

From January 2019 to March 2019, Thailand’s business events sector has been ranked by ICCA at number four globally for international conventions in Asia â€“ after Japan, China and South Korea â€“ with 193 events.

According to The Bangkok Post, Thailand welcomed more than eight million corporate business travellers in the second quarter of fiscal 2019, an increase of 2.9 per cent year-on-year. International MICE travellers during the period which ended in March stood at 353, 256, up 11 per cent.