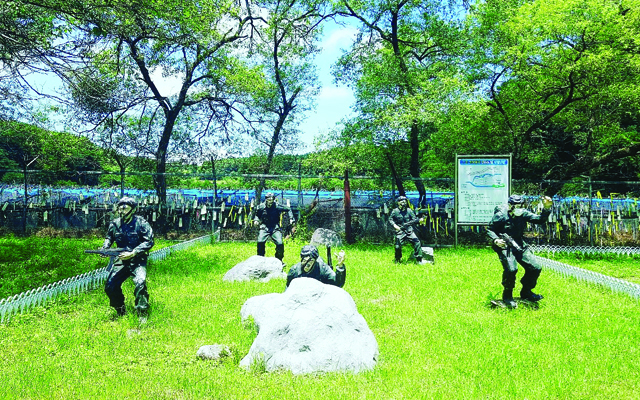 South Korean tour company DMZ Spy Tour is promoting two new experiences for corporate groups that give participants a clearer understanding of the relationship between North and South Korea.

The tour company specialises in tours at and around the DMZ â€“ the Korean Demilitarized Zone which exists on the border between North and South Korea. Shrek Lee, head director of DMZ Spy Tour, explained that as tensions between the two Koreas rose last year along with renewed media attention on North Koreaâ€™s nuclear weaponry, foreigners were hesitant to visit the South as they thought there was unrest on the Korean Peninsula.

â€śSo I approached Korea Tourism Organization (KTO) and South Korean army agencies, and told them we needed to do something to show travellers how we are able to defend ourselves and that there is peace at the border,â€ť Lee said.

As a result, the signature DMZ Spy Tour, with an angle tailored for corporate groups, was born. The tour comprises activities at the South Korean army camp, a conference opportunity at an indoor venue, an outdoor barbecue and entertainment in the form of a K-pop cover concert or jazz concert.

The other corporate tour is a boardgame-based teambuilding activity built around the Korean War, and a private tour along the North Korean Spy Commando Invasion Route.
Both are good for groups of up to 70 pax.

Lee claims that the signature DMZ Spy Tour is offered exclusively by his company, and has so far been popular among American and Singaporean holidaymakers. â€śBookings from OTAs out of Singapore alone (numbered at) 80 last year, bringing us an estimated revenue of US$50,000,â€ť he said.

For the MICE spin-offs, Lee said promotion work has only just started, through fam trips organised with KTO, but feedback has been positive.

â€śBuyers who went on these experiences were pleasantly surprised that the border is so peaceful and that meetings can even be held near the border,â€ť he added.