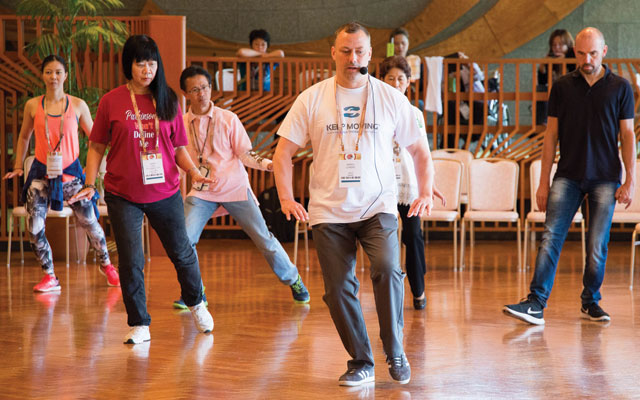 Event brief
The World Parkinson Coalition (WPC) organises the WPC every three years to discuss the scientific advances and care initiatives in the fight against the disease. It brings together physicians, movement disorder specialists, neuroscientists, nurses, rehabilitation specialists and people with Parkinsonâ€™s disease, along with family members.Â

Key themes of the 2019 meeting were advancing science, promoting community and inspiring hope. The previous congress in 2016 was held in Portland, Oregon, and the next one will take place in Barcelona in 2022. Challenges
Given a number of unique challenges â€“ primarily ensuring the wellbeing of people with Parkinsonâ€™s while travelling in Japan â€“ planning for the Kyoto event started three years in advance, said Elizabeth Pollard, executive director of the coalition.Â

Broadly, the challenges fell into three categories, she said; ensuring those with Parkinsonâ€™s could get the very most out of the event; uniting Japanâ€™s medical experts in this field; and navigating Japanâ€™s cultural norms.Â

â€śParkinsonâ€™s disease itself presents some challenges, regardless of global location,â€ť Pollard told TTGmice. â€śIt creates barriers for some patients due to the physical challenges of moving from one point to another. Itâ€™s also a complicated disease that can cause patients to feel depressed, anxious or fatigued, and these symptoms can also prevent participation.

â€śAlso, in many parts of the world where medication is costly, people with Parkinsonâ€™s may struggle financially, so attending a global conference would not be possible without travel grants and financial support.â€ť

The WPCâ€™s unique congress model of a congress is designed to bring all the delegates in a fully-integrated meeting, not siloed, which was a new concept in Japan.Â

Finally, Pollard knew that the success of the event would rest heavily on establishing relationships well in advance.Â Hence, the first thing she did was to plan multiple visits to Japan to build strong relationships with local experts they would be working with.

Pollard and her team quickly discovered, however, that companies and organisations in Japan had a habit of transferring staff to different departments every few years, making it difficult to ensure continuity.

Solutions
To assist people with Parkinsonâ€™s, junior clinicians and researchers, and health professionals from developing nations who wished to attend the congress, the WPC works with a number of supporters to create a travel grants fund. Grants are based on need, but also require recipients to help educate people upon return home.Â

To encourage the participation of Japanese health experts, a local organising committee was set up.Â â€śThis group of Parkinsonâ€™s leaders live across Japan and are highly regarded, both inside and outside Japan for their scientific and clinical knowledge,â€ť Pollard said. â€śTheir support helped elevate awareness and recognition of the WPC.â€ť

To ensure that everyone was prepared for the cultural differences, the organisers kept discussions and training ongoing and speaking with as many people as possible in the run-up to the congress.Â

A major part was the Make the City Parkinsonâ€™s Ready campaign that has worked well at previous events. The programme trains and prepares all front of house staff who will be coming into contact with people with Parkinsonâ€™s, such as convention centre teams, security officers, hotel staff, police, and airport customs officials.

Some examples of things to be aware of when working with PwPs â€“ People with Parkinsonâ€™s â€“ is to make sure that there are plenty of places to rest, ensuring that water is readily available and understanding that PwP have a high rate of falls due to their uncertain gait and balance. Local police were briefed that PwP often have soft speech due to muscle weakness in their throats, can appear to be slurring their words and may appear to stumble. That behaviour can be misinterpreted as intoxication.

â€śWhile only 25 per cent of our delegates are people with Parkinsonâ€™s, ensuring they have a positive experience is important for the success of the congress,â€ť said Pollard. â€śEducation is the key and we take that responsibility seriously. We believe it is part of our legacy and what we leave behind in the host city and country.â€ť

Key takeaways
Given the unique nature of the WPC, it is important to build relationships with local experts â€“ including medical professionals, patientsâ€™ organisations and local vendors â€“ well in advance. That helps to increase the level of service and delivers better outcomes for the delegates.Â

â€śOur congress is unusual and unique and it requires a lot of interaction and education ahead of time,â€ť Pollard said.