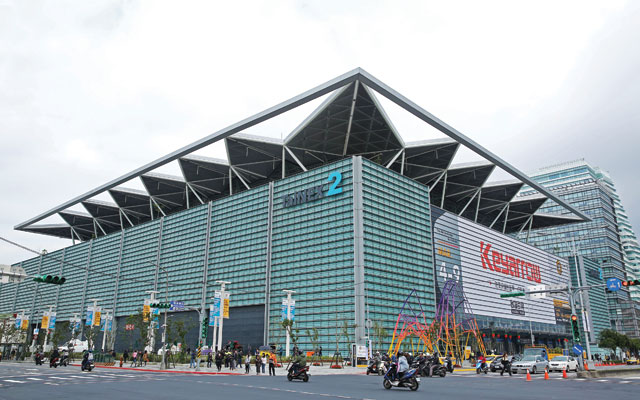 Earlier this March, the Taipei City Government established its first MICE office – a breakthrough after years of effort – in a bid to create a sound environment to further develop the city’s business event sector against a backdrop of an ultra-competitive Asia market.

And the city is smartly playing to her strengths, vividly highlighting unique locations where business events can be held such as the Huashan 1914 Creative Park and Taipei Expo Park; bettering its infrastructure with the recent launch of TaiNEX 2; and wearing its newly-minted Michelin-star status proudly.

Pu Lin, director of arts, Taiwan Creative Industry Development (which oversees Huashan 1914 Creative Park), said: “There is only one Huashan. Foreign companies like Google like to come here, and make use of our unique indoor and outdoor spaces to present their products. TedX Taipei is also held here every year.”

In addition to being a function space, Huashan 1914 Creative Park also doubles up as lifestyle destination for delegates to explore in their free time, as there are quaint shops and hole-in-the-wall cafes that have set up homes here.

Similarly, the 14-hectare Taipei Expo Park has a lifestyle component – the 9,900m2 Maji Square, filled with more than 80 lifestyle shops and F&B options. The park has numerous indoor and outdoor spaces, three of which are dedicated for corporate and association groups: the Expo Dome, Eco Ark, and Expo Hall.

Rich Shen, director administration management of Taipei EXPO Foundation which manages Taipei Expo Park, shared: “We can hold tradeshows and gala dinners at the Eco Dome; while large-scale performances or speeches can head to the Expo Hall which can seat 1,200 comfortably.”

Just across the road, TaiNEX 1 has 45,360m2 of exhibition space, a 22,680m2 column-free Sky Dome, and nine conference rooms. When combined, TaiNEX is the country’s largest exhibition venue.

“It is very convenient to hold events here, as within a five-minute-drive radius are six hotels, and in 2022, there will be an additional hotel and shopping centre nearby,” revealed Philip Huang, executive director of TaiNEX 2.

When asked how Taipei’s MICE business has fared over the years, project manager of ABLY Conference and Exhibition (part of Taiwan Tour DMC), Lilly Lee, shared that she has seen the city’s business event sector grow year-on-year, since the company started handling such events around a decade ago.

“But competition is pretty tough,” she opined. “While Taiwan may be cheaper than South Korea and Japan, we are more expensive than Bangkok.”

Hence, she stressed that during a pitch, they focus on Taiwan’s unique points and cultural attractions. One new way to sell Taipei was through gastronomic adventures, thanks to the inaugural Michelin Guide Taipei which launched in 2018, featuring a total of 110 dining establishments.

For instance, groups can arrange to dine in a private room at three-Michelin-star Cantonese restaurant Le Palais, the only restaurant to be bestowed with three stars. Delegates can also go on a gastronomic hunt for the 10 street food vendors listed in the guide during the evenings after a long day of meetings.

“We are also working closely with private stakeholders like PCOs, to identify the best chances of bringing in an international meeting,” Lee Jerchin, deputy managing director, Taipei MICE Office, shared.

The ultimate goal, he pointed out, was to “bring Taipei’s name to the international masses”, as “we want to be the top business event city in Asia”, acknowledging that it is going to be a tough road ahead. Currently, Taipei sits at sixth position on ICCA’s 2018 city rankings.

However, the destination is making strides. A recent large win was the Rotary International Convention 2021 which is expected to bring 40,000 people to Taipei, and generate NT$4 billion (US$219 million) for the economy. Organisers say it is the largest meeting of its kind in decades.

Before that, the World Trade Centre Assembly 2020 is expected to bring in another 300 delegates.

He elaborated: “As the conference attracts students, academics and professors, I need a destination that has a wide range of choices in terms of accommodation and food. For example, students will be able to stay in cheaper hotels and explore night markets for cheap eats, while professors may be able to eat at restaurants and stay in star hotels.”

Meanwhile, professor Rindit Pambayun, department of agricultural technology, Palembang-based Sriwijaya University, talked about how halal-friendly Taiwan is, and is a great destination for conferences with a Muslim majority.

“There are halal-vending machines and prayer rooms in convention centres, while I was surprised to find a Koran in my room at the Howard Taipei. My dietary needs was also adhered too. This shows that the government is putting in the effort (to attract Muslim visitors).”