The latest game tour rolled out by Tribe Tours pits the problem-solving skills and speed of teams against each other, amid the backdrop of the sprawling Jewel Changi Airport. 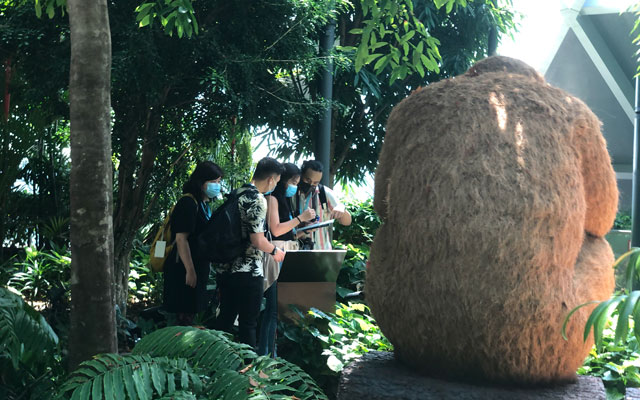 Concept
With access to non-essential travel still shut, the steady stream of domestic activities in Singapore continue to see demand from corporates hungry for creative team experiences. On the back of the success of its Chinatown Murders game tour set in the historic district, Tribe Tours launches a second version that explores Jewel Changi Airport beyond its lifestyle offerings.

What
In Jewel Heist, two teams lock horns in a battle of wits and speed to locate a â€˜jewelâ€™ in the mall, while solving trivia questions and racking up â€˜prize moneyâ€™ points. Puzzles encountered at each stage have time limits ranging from 15 to 25 minutes, with the entire tour running up to three hours.

MICE application
In a time of limited teambuilding options, an exciting challenge with storied trivia and friendly competition can be a welcome break from the daily grind. Tours in Singapore are now allowed a maximum guest capacity of 50, enabling larger corporate groups to be split into multiple teams to duke it out for a win.

In accordance with safe management measures, our tour started with a pre-tour huddle, where sanitised audio sets were distributed. Then, splitting into two teams (one with four members, and the other, five), we set off on our mission.

The first task was fairly straightforward and kept us within a contained portion of Jewel, but it was a deceptively simple start. As the story progressed and the tour made its way through the different parts of the mall, we found ourselves racing and combing through entire levels in search for clues â€“ and not before racking our brains to interpret the hidden meanings in each puzzle.

Thankfully, each team is given a collection of lifelines redeemable with the â€˜prize moneyâ€™ points racked up through solving puzzles and trivia questions. These pop-up trivia quizzes are a clever component of the tour that taught us lesser-known facts about Jewel. For instance, I now wield the knowledge that each of the 9,000-plus triangle glass panes of Jewelâ€™s dome has a unique QR code for maintenance.

The scale of Jewel Heist meant that each member of the team had to pull their weight, whether it be keeping a sharp eye on surroundings or speeding towards a clue. Flexibility and communication were also essential to our strategisations about which lifeline to use, as activating them entailed a deduction from our â€˜prize moneyâ€™ pool. This element could be useful for companies hoping to foster openness between employees.

The end of the tour placed us at the top level of Jewel, thanks to complimentary access into the Canopy Park. From here, participants may choose to linger and enjoy the view, or retreat back to the lower levels for a team meal. Those who decide on the latter should note that they would have to pay for re-entry into the Canopy Park.

Service
One marked difference of this game tour from Chinatown Murders is the introduction of a competitive element. Based on feedback from its Chinatown Murders tour â€“ particularly from corporate and special interest groups â€“ Tribe implemented a points system in this second instalment, which made the other participants and I more driven to quickly complete the missions.

The guide-slash-storyteller leading our tour, Elaine, was always ready for our enthusiasm and doubts, and was adept at promoting friendly competition between teams â€“ lest the battle gets too heated. This passively competitive approach has also hit the right note with its test groups, revealed Tribe Tours co-founder Jason Loe.

While Jewel Heist plays out in an air-conditioned building, the tour left us sweating from scouring whole floors of the mall in between cracking puzzles. Guests who have been on the Chinatown Murders tour may have an edge, but beware that Tribe is back with trickier tasks this time.

Overall, the tour will test oneâ€™s mettle in teamwork and communication skills, but not without a generous helping of fun and learning.

Rate: S$80 per person
Frequency: Every Saturday and Sunday, from 14.30 to 17.30
Contact
Email:Â bookings@tribe-tours.com
Website:Â https://singaporediscovers.tribe-tours.com/jewel-heist-game-tour/