The September results of the Corporate InSITEs study has shown that 50 Fortune 500 companies in the US are delaying their resumption of international incentive trips, with most turning first to domestic destinations. 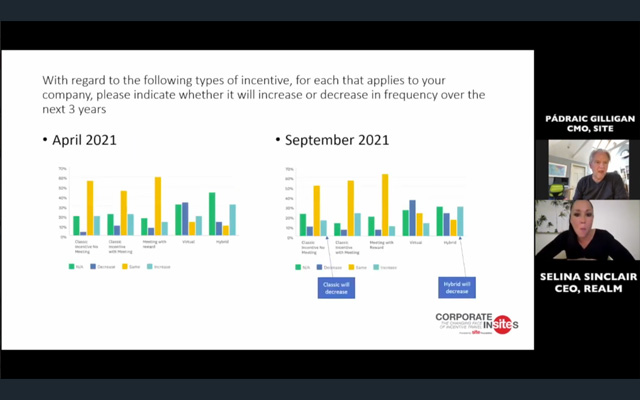 The September results of the Corporate InSITEs study has shown that 50 Fortune 500 companies in the US are delaying their resumption of international incentive trips, with most turning first to domestic destinations.

For overseas programmes, most are looking to conduct their first in-person meeting and incentive trip in 2Q2022, and a number are even expecting their first post-pandemic international activity to only take place in 2023.

In presenting the findings during IT&CM Asia 2021 last week, Selina Sinclair, CEO of Realm and a SITE Foundation trustee, also pointed out that the pandemic has forced 74 per cent of respondents to replace their 2020 incentive travel with another type of reward and 42 per cent to do the same with their 2021 programme. The proportions are slightly larger than the April findings, where 71 per cent and 31 per cent had adjusted their incentive programmes respectively.

Sinclair said she was not surprised “since many destinations around the world are still closed”.

“As an inbound operator in Asia, we hope that programmes could return in 2021 or early 2022, but that’s just not the reality at the moment,” she said, adding that the study has also identified Delta concerns as leaving an impact on incentive travel confidence.

“We thought that there would be just one or two waves of Covid, but we have seen four, five waves in certain countries. That has obviously added to the volatility within companies wanting to return to incentive planning, and causing companies to move their dates to the later part of 2022,” she said.

Fellow presenter, Padraic Gilligan, chief marketing officer of SITE, shared that respondents are mostly looking to maintain classic forms of incentive programmes – incentives with no meetings, classic incentives with meetings, and meeting with rewards. Results do not differ much between April and September, although both Gilligan and Sinclair have observed some creative virtual meetings and incentives being held during the pandemic.

Sinclair noted that a smaller number of respondents are intending to adopt hybrid formats for their future incentive events in the September study compared with the last, but said it “remains to be seen what this really means…since industry players are still debating a lot on the definition of hybrid incentive events”.

In light of Covid concerns, respondents regard contracts & risk management, destination selection, better analytics, and new resources & skills as factors most important to the future success of their incentive travel programme. The results between April and September are similar.

Sinclair predicts sustainability considerations will rise in rankings in the January 2022 study once decision-makers are able to move past urgent matters that must be resolved and “move forward again on planning content”.

She highlighted a continued sense of optimism for incentive travel resumption among leaders in the surveyed US companies. In the April study, 94 per cent of respondents were committed to returning to incentive travel.

A much smaller percentage is committed to resuming incentive travel, but will have to reduce cost.

Sinclair reflected: “I expected more to opt for the need to reduce cost since we know budgets have been reduced and many have been able to see savings from not doing any activities in 2020 and 2021 or replacing their incentive programmes with virtual executions. The good news is that I have companies coming up to us saying, we want to do our programmes again in 2022/2023 and now we have doubled the amount (of money).”

Expanding on the findings, Gilligan referenced the Incentive Travel Industry Index, which the SITE Foundation is involved in with the Incentive Research Foundation and Financial and Insurance Conference Professionals. He noted that destination safety considerations had “eclipsed everything else in terms of organisers’ concerns”.

“Companies are taking a different view; they are concerned about their people and duty of care to qualifiers. In that context, issues of safety become much more important than issues of value for money,” remarked Gilligan.

Agreeing, Sinclair said: “Safety used to mean different things. Before, safety is what will happen in the destination. Today, safety is paramount even before you leave home.”

With the September Corporate InSITEs findings pointing to a delayed return in international incentive travel programmes undertaken by the important US source market, Sinclair said Asian destinations and DMCs would have to continue to “look for new ways of earning revenue” and to adapt to local and regional clients.

“We Asian DMCs have shown that we can pivot well, like we did with virtual events. Local events have become the bread and butter for many companies. I know a lot of DMCs have innovated too,” she said.

Asian DMCs are also staying busy with laying the groundwork to “support international companies that are looking to (return to their) destination”.

“There are a lot of questions about arrival requirements; changes to operations when we visit in two, three, four or five years from now; etc. DMCs are playing a bridging role between the government and organisations in the supply chain. At the same time, DMCs are getting their teams trained and certified to implement their government’s safe management measures,” she said.

“(Tourism boards) are obviously linked to all the decisions made within the government. Some tourism boards have been outstanding in their ability to communicate information as they come to light,” she said. – Additional reporting by Mimi Hudoyo