Malaysia's first international hybrid meeting this year went off without a hitch, having been modified to a hybrid event from a virtual version in a mere four months 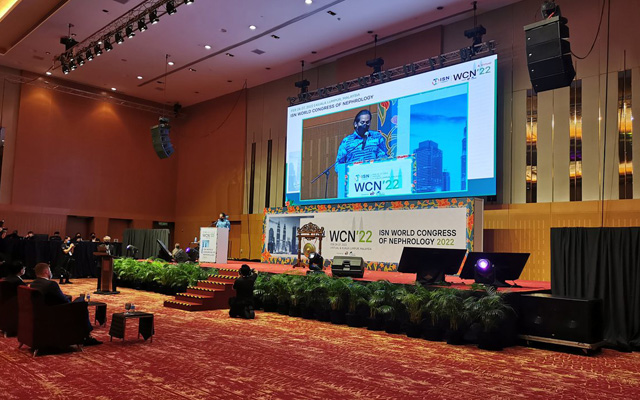 WCN’22 attracted close to 4,000 delegates, with more than 3,000 attending virtually and over 900 in-person, making this event one the highest turnouts in Malaysia for a medical congress since the pandemic began.

Complementing the broad scientific program, there were also short videos profiling challenging but inspirational accounts of people affected by kidney diseases, told with compassion and courage. This was part of the ISN Community Film Event, a unique initiative to raise awareness of the reality of living with kidney diseases.

As a hybrid event, participants from around the world were able to follow the virtual congress’ livestreamed sessions. The sessions were also recorded and made available on-demand directly after the livestream ended.

The virtual element was also supplemented by an in-person programme at the Centre for over 900 delegates, where 100 out of the 1,000 abstract submissions that came from local medical professionals and organisations were discussed face-to-face and virtually with international experts.

Challenges
Organisers had originally planned for a fully virtual congress. However, in November 2021, the government relaxed Covid-19 restrictions in Malaysia and allowed for the resumption of in-person events which had to adhere to strict standard operating procedures. A decision was then made to adapt the event to a hybrid format.

“With only four months to plan for the event, this presented various challenges tied to reorganising the entire programme to cater for both virtual and in-person participants. Our planning had to result in a smooth and seamless virtual and in-person congress,” recalled professor Abdul Halim Gafor, president, Malaysian Society of Nephrology.

According to Abdul, the decision to hold a hybrid version was because “delegates had the benefit of networking with doctors from the region”, as well as “some delegates from neighbouring countries who attended in-person”.

Discussions and exchange of insights and research projects between doctors, he added, were also more fruitful when done face-to-face.

To ensure a smooth and seamless virtual and in-person congress, two main teams, an on-ground team and a virtual team in Belgium, worked closely with the Centre’s in-house information technology team.

Alan Pryor, general manager, Kuala Lumpur Convention Centre, shared: “Everything onsite, which mainly comprised of hardware was handled by the on-ground and Centre’s teams. All the video and audio were collated and sent to the virtual team, which was then in charge of securing it and broadcasting it to the delegates all around the world.

“Our team also worked closely with the organising committee to advise on the best solution to ensure a seamless and uninterrupted hybrid event. This involved partnering with two Internet service providers to have a mainline and backup in place so the virtual and face-to-face elements could be delivered securely and reliably.”