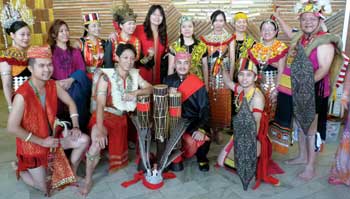 The Malaysian Peat Society overcomes budget limitation and brings a showcase of Sarawak to Stockholm as part of its efforts to attract delegates to the 15th IPC in 2016, writes S Puvaneswary

Work was not over for the Malaysian Peat Society (MPS) even it won the bid to host the 15th International Peat Congress (IPC) in 2016 in Kuching, Sarawak.

The triumphant announcement came in 2010 after the bidding presentations were made in Jyvaskyla, Finland. Malaysia was competing for hosting rights against the Latvian Peat Producers Association.

According to Lulie Melling, congress general for the 15th IPC, the win was a meaningful one for MPS as it would be the first congress to be held in an Asian city. IPC has always rotated in Europe and North America.

The congress will be themed Peatlands in Harmony â€“ Agriculture, Industry and Nature.

Melling said: â€śThe congress will provide an excellent forum for researchers, academics and practitioners to congregate, share information and discuss their scientific results and experiences, with particular reference to peat and peatlands in the tropics.â€ť

With the win in the bag, MPS must work to generate interest among scholars and scientists. To achieve that, MPS decided to use the 14th IPC in Stockholm in June 2012 as a platform to present scientific papers and promote Malaysia as the next congress destination.

Melling said: â€śWe wanted to create a huge and positive impact at the 14th IPC.Â  Most participants were from Europe and had not been to Sarawak. We wanted to show them what the country had to offer in terms of infrastructure, facilities and recreational enjoyment, such as nature, adventure and colourful cultures.

â€śWe received a budget from the Sarawak Convention Bureau for the 15th IPC, and we apportioned a part for delegate promotion. We also raised funds through sponsorship to cover airfare, accommodation and registration fees for 30 members who would be presenting eight papers on tropical peat at the congress, as well as promotional materials such as leaflets, brochures, Sarawak pepper, caps, T-shirts, stuffed toys such as the iconic Orang Utan which is synonymous with Sarawakâ€™s conservation efforts.â€ť

To keep expenses down, the committee decided to bring their own food to Stockholm instead of dining out.

She explained: â€śA simple meal (in Stockholm) would cost RM30 (US$9.70), four times more than what it would be in Malaysia. Thus, we decided to bring a rice cooker, rice, sambal ikan bilis (anchovy sauce), canned food and instant noodles to make our own breakfasts and dinners at the backpackers inn we stayed at.â€ť

To avoid exceeding the airlineâ€™s baggage allowance, each delegate was allowed only 10 kg of personal belongings in their checked luggage. The rest of the allocated space went to traditional costumes, promotional materials and food.

Before the mission in Stockholm, the group took lessons on traditional dance at the Ministry of Social Development and Urbanisation Sarawak, which also loaned the participants costumes and musical instruments.

â€śWe also borrowed a gong from the Tun Jugah Foundation and learnt how to play it. Everyone had to turn up for practice or they would not be allowed to go on the trip. There were no exceptions, not even for my husband,â€ť she said.

At the congress in Stockholm, some members of the committee presented scientific papers while others manned the booth. Sarawakian music was played, and a gong was struck during lunchtime to draw congress attendees to the booth. Leaflets and brochures were handed out, and delegates were invited to Sarawak.

â€śIt is important to promote the destination to get delegates excited and curious enough to want to come to the congress in Kuching. We are in the midst of planning a delegate promotion exercise during the 20th World Congress Soil Science from June 8-13, 2014 in Jeju, South Korea.

â€śMPS believes delegate promotion (must be done) continuously to (build) publicity and create awareness and interest for the 15th IPC,â€ť she declared.