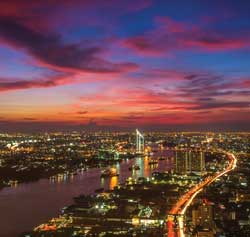 Thailand has exceeded its MICE targets last year but for it to achieve an equally stellar showing in 2014, quality and creative ideas are needed, say event specialists. Greg Lowe reports

While MICE specialists continue to differentiate themselves by developing unique elements for client itineraries, few are optimistic last year’s double-digit growth can be achieved in 2014 as long as the spectre of political instability and protests remain.

While some DMCs have managed to relocate existing groups elsewhere within Thailand or to neighbouring countries such as Laos, Myanmar and Cambodia, others are worried that the political instability is scaring off new business.

Michael Lynden-Bell, general manager of Exotissimo Travel Thailand, said: “Corporate companies are not willing to risk bringing their staff and clients into a country that is perceived unstable or dangerous.

“We have lost a lot of quotes to Malaysia recently and I expect this trend to continue following these protests.”

Travel companies told TTGmice that the protests have already dampened business in the first quarter and could lead to a significant rise in cancellations and downturn in new bookings for the next six to eight months if the anti-government rallies are protracted, disrupt the February 2 general elections or turn violent.

Political analysts have forecasted more violence and a bleak outlook for Thailand in the near term which, if accurate, would scotch the chances of a repeat of last year’s strong tourism performance.

“(Performance surpassed) our annual targets for both (arrivals) and industry earnings,” said Pishnu Plaikaew, TCEB spokesperson. “Asia was our largest source of MICE visitors, representing 75.3 per cent of all MICE visitors, followed by Europe, with 10.1 per cent, and the US, with 4.7 per cent. The top five countries were China, India, Malaysia, Japan and Singapore.”

Some DMCs remain relatively optimistic about this year’s performance given the usually fast rebound from crisis-sensitive Asian markets.

Hans van den Born, managing director of Diethelm Travel Thailand, said: “Asian source markets tend to cancel rather quick but also have a very short lead time, therefore I am not too pessimistic for 2014.
“There are several nice projects in our portfolio this year which will not be affected by the current political uncertainty.”

Ensuring product quality and innovation will be even more important for Thailand’s success in the MICE market due to current challenges, and operators should be mindful of developing programme elements outside of potential troublespots.

Given the highly competitive nature of the market, DMCs are keen to keep their latest products and event ideas close to their chest, however, they have noted some emerging trends in the local MICE market.

Clients from within Asia-Pacific are now requesting the same level of innovation as Western groups to be incorporated into pre- or post-event packages. Elements range from popular favourites such as Thai cooking classes and cultural performances to challenging teambuilding activities like building boats from wooden pallets.

“We’re especially interested in unique products,” said van den Born. “Demand for pure incentive tours is diminishing and for those that we do handle, CSR is becoming more important.”

Lynden-Bell agreed that CSR is becoming a key focus for corporate incentives and that such activities must have clear tangible benefits. He cited developing sustainable vegetable gardens for local schools who could then sell produce to support their English-language Saturday camps as one such example.

“Group sizes are also becoming slightly smaller with lower overall budgets but at a higher spend per person (while clients are) requesting for more authentic experiences with more local interactions,” he said. “With smaller groups, activities such as cultural dinners in a ‘real’ rather than staged ethnic village make for a more memorable incentive.”

“They know what they want and expect something new each year,” he said, adding that such groups ranged from 20 to 40 pax and were mostly from within South-east Asia.

Popular elements include treasure hunts and Amazing Race- and Survivor-type activities, Belcher observed, saying that these are typically organised for one- or two-day teambuilding programmes or incorporated into a two- to four-day meeting or conference-cum-incentive.

How I did King’s Cup Elephant Polo The five-day event, which celebrated its 12th anniversary last year and started on August 28, pulled in scores of sponsors and combined a host of activities, including the polo games themselves, a book launch, monastic blessings, fashion events, a CEO media briefing and a gala dinner which significantly contributed to 4.1 million baht (US$124,899) raised as part of the event’s CSR efforts.

“We started the planning process at least nine months (ahead),” said Rajakarier. “That’s how much time it takes to bring it all together. We have a dedicated team to handle the elephant polo although many departments across the company contribute.”

“You start the planning, you get the sponsors and arrange the PR events.”

Sponsors typically use the event as a key incentive. Luxury watchmaker Audemars Piguet, for example, flies a handful of top spending clients from their branded boutiques across Asia for four days and donates one of its latest models to the charity auction.

“It’s amazing when you look at how the elephant polo has evolved over the past 11 years,” Rajakarier said. “People come each year and say, ‘Wow, this is the best year ever. But that’s the real challenge, how do you keep raising that bar?”

Have a feast at Gaggan Gagan Anand, who heads Gaggan on Lang Suan 4 in Bangkok, was the first Asian chef to study at Michelin-starred chef Ferran Adria’s culinary research institute in Spain. His experiences armed him with a unique, unorthodox approach to Indian cooking. Sous-vide, gelification and plenty of liquid nitrogen are deployed to add a new dimension to traditional curries. Trying the tasting menu at the Chef’s Table is a must.

Making Teams has crafted Supersleuths, a race around a city’s cultural sites in search of a missing historical artefact. Teams of up to 10 are provided with city maps, audio cues and cryptic emails which they must decipher to find the target locations. A range of transport modes from foot, bicycle and bus to tuk tuk, taxi and water taxi can be used to navigate the city in question. Teams must recover the hidden artefact from the final location before returning to base.

Boasting decades of experience, MJETS’ pilots, aircraft engineers and technical staff are trained and rated by the US’ Flight Safety International and Thai DCA. Its services are fully insured and operated at the highest global safety standards. Plus, it has its own private jet terminal with full ground services at Bangkok’s Don Mueang International Airport.

Executive Wings, another pioneer in private jet services for high-level executives in Thailand, operates a fleet of Hawker 850XP, Hawker 800XP and King Air 350, all spacious and luxuriously appointed.

Baan Teelanka, which opened in February, claims to be the first attraction of its kind in the country – a fully furnished 13m tall western-style house with three levels where everything from the kitchen and bedrooms are arranged upside down. A-Maze, a 1,000m² garden labyrinth located outside the house, follows the mind-bending theme. The venue is available for private hire for events and themed parties.