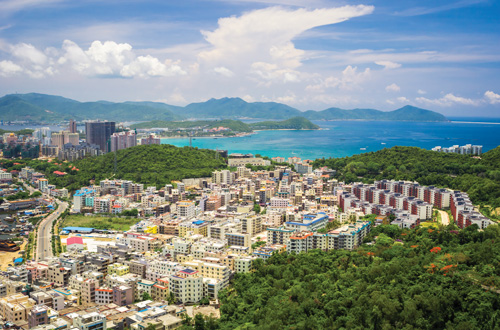 A slew of MICE-ready hotels and a possible subvention programme will move the Chinese destination up the ranks. By Caroline Boey

With Sanyaâ€™s 32 new hotels in Haitang Bay â€“ of which 12 have opened and all offering MICE choices galore â€“ and the Sanya Tourism Development Commissionâ€™s (STDC) submission of a subvention proposal which is expected to be approved by this year, the destination is making all the right moves to become Chinaâ€™s next hot MICE destination at home and abroad.

According to Wang Feifei, deputy director, STDC, a task force has also been initiated within Sanya Tourism Association to promote MICE and professionalise the industry.

With new regional and international flights operating to Sanya from Frankfurt, Ho Chi Minh City and Kaohsiung in the first half of this year, and the 14 flights that commenced since the beginning of last year from Japan, South Korea, Russia, Thailand, Vietnam, Hong Kong, Macau and Taiwan, Wang said STDCâ€™s priority would be to target those markets.

On a broader scale, Sanya has leveraged its position on the Maritime Silk Road to actively implementing the One Belt, One Road strategy to develop economic and international cooperation in South Asia, West Asia, Central Asia, Central and Eastern Europe, and Russia.

At home, Sanya wants to target the whole of China for MICE.

Other MICE initiatives include the beautification of the destination, establishment of policies that encourage sustainable development and the introduction of the Tourism Police last year.

HIMICE, Hainanâ€™s leading DMC, chalked up US$35 million in sales last year, an increase of about 30 per cent. A spokesman said safety in Sanya, its good natural environment, weather and MICE infrastructure were strong factors in its favour.

â€śHIMICE will be handling a 3,500-delegate event next year for a US pharmaceutical company, GE already organises many events in Sanya annually, and Sanya is the regional choice among island destinations,â€ť he added.

HIMICE, which also organises sports events, was also picked to deliver a 2,000-pax Mercedes Benz event with teambuilding in October.

As an international MICE destination, Kevin Chen, operation events manager of regional DMC EXO Events, said Sanya could do with more airlift and staff who are better trained, able to speak English and understand the needs of international travellers. Chenâ€™s main markets are the US and Europe.

â€śWhile Sanya is under pressure to push its aviation development, there is also the security issue with it being a military base and where the flight corridor is under military control,â€ť Hazebrouck remarked.

The local government has responded very quickly to feedback on airport infrastructure and capacity, Vetry said, adding: â€śThat the focus in Sanya is on more international busness and is now competing with destinations like Taiwan and Thailand, are signs of the industry maturing.â€ť

For the first time, Sanya made it to ICCAâ€™s 2014/2015 Asia-Pacific city rankings, marking a major milestone.

With the massive development in Haitang Bay â€“ where AccorHotels has planted its first Sofitel beach resort, the Sofitel Sanya Leeman Resort, and where CDF Mall, said to be the worldâ€™s largest duty-free store, have opened â€“ Sanya has new products to offer domestic and international MICE groups.

At the MICE forum, Noor Ahmad Hamid, regional director, Asia-Pacific, ICCA, advocated the formation of a CVB to help Sanya conduct research and bid for association events. â€śCompetition is fierce among the first- and second-tier cities in China and associations will be critical because their meetings rotate.

â€śSanya can work together with destinations with the same appeal like Jeju, Bali, the Gold Coast and Pattaya, start an alliance of coastal destinations and tap on the others,â€ť he suggested.

Industry players agree Sanya needs to step up its marketing and promotions, stand on its own right and not be branded the â€śOriental Hawaiiâ€ť or the â€śSt Tropez of Chinaâ€ť.

Xu Feng, vice president, North Star Events Institute, which handles a number of medical groups and corporate meetings, said the safety and low-risk aspects of Sanya has been gaining attention and should be further highlighted.

With STDC in the driverâ€™s seat, increased involvement of the private sector, better connectivity, more attractive room rates and an overall improved product, Sanya is well positioned to reach its MICE ambitions. Sanya has adopted an aggressive strategy to launch new international air routes targeting destinations within a four-hour, eight-hour and 12-hour flight radius. The priority is to further improve connectivity to Singapore, Malaysia and Thailand in South-east Asia, and Russia. In 1H2016, Sanya Phoenix International Airport welcomed 8.8 million arrivals, a year-on-year increase of 3.9 per cent.

The Sanya Tourism Development Commission has submitted a proposal to introduce a subvention policy and until this is formally approved, Fan Mu, the commissionâ€™s director, said applications for support can be considered on a case-by-case basis.

51.7
In millions, the number of MICE delegates who attended national and international conferences and meetings, with between 50 and 2,000 people each, in Sanya last year

200,000
In square metres, the total meeting space available in Sanya, where there are a number of hotels offering column-free ballrooms measuring 1,500m2.