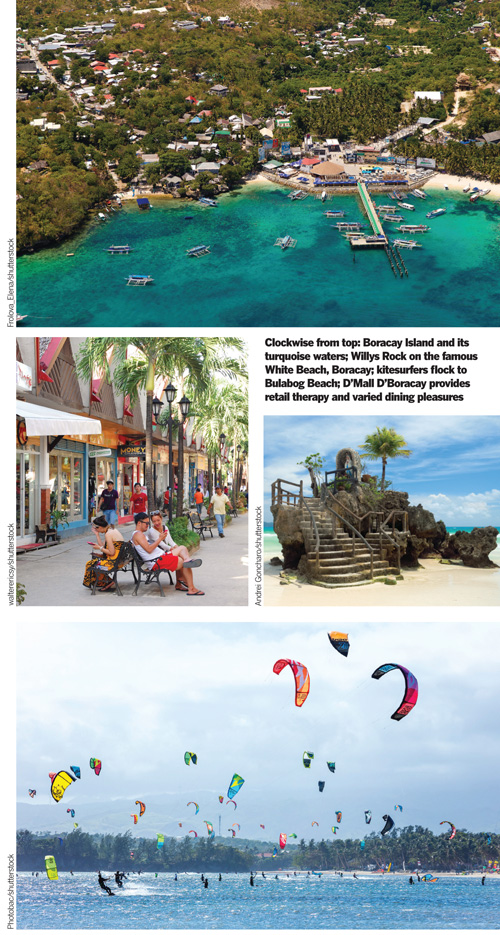 With its natural beauty, powdery sand and clear waters, it is obvious why Boracay started out as a beach destination but had rapidly won the favour of corporate groups, particularly for incentive trips and meetings.

The island resort, however, should “dress up its image” and start building a relationship with nearby islands to add more excitement for business event planners, urged Angel Ramos Bognot, president and ultra business event creator, Afro Asian World Events in Manila.

She also suggested adding further value to Boracay with new activities combining sports and adventure because skydiving, parasailing and other activities eaily available on the island are “already passe”.

Several posh properties have succeeded so far in becoming destinations themselves as they develop fresh options for corporate groups. For its guests, Shangri-La’s Boracay Resort & Spa has a complimentary tour of its 12.5-ha premises which boast its own private beach and port.

The resort has done well with corporate events through its Sunglasses at Work Meet by Design programme which customises meetings by incorporating fun experiences.

This follows the trend of competing on luxury among the increasing number of upmarket hotels on the island. The new The Lind, for example, tempts business clients away from other hot island destinations with a roof-deck infinity pool – said to be the first on the island – as well as 109 well-appointed suites and customisable meeting spaces and attractions.

Boracay’s culinary delights add another dimension to the destination’s appeal. Lopez said that Discovery Shores Boracay, which will be part of Condé Nast Johansens luxury hotel collection in addition to its existing affiliation with Preferred Hotels and Resorts, is expanding its F&B offerings with the 2Q2017 opening of Italian Osteria, a restaurant specialising in Italian and Mediterranean cuisine and featuring an open kitchen and roof-deck bar with a 360-degree view of Boracay.

This follows the hotel’s revamp of its popular Indigo Restaurant menu last year to offer coastal cuisine for lunch. It used to only serve dinner.

Across the island, hotels are improving their quality and more are emerging to compensate for the limited facilities that can support bigger conferences and exhibitions. Boracay’s largest convention centre can only handle up to 2,500 pax and logistics, transport, freight and storage can be an issue due to the island’s limitations, including connectivity.

But Hannah Paula Yulo, erstwhile director of sales & marketing at Paradise Garden Resort Hotel & Convention Center in Boracay, expects the island to improve its competitive edge in the face of greater competition from local destinations like Palawan and Bohol and foreign destinations like Bali and Phuket.

Yulo pointed out that the expanded Caticlan Airport, planned improvement of ferry and port facilities, and increasing accessibility by air and sea are adding values that bode well for business events in Boracay. The expanded runway at Caticlan Airport in Boracay, from 950m to 1,800m, enables it to accommodate Airbus A320 aircraft, unlike in the past when it can only serve smaller aircraft with up to 76 seats. Event delegates can now fly together and enjoy check-in baggage allowance. Before, groups had to take separate flights and were not allowed check-in baggage.

Philippine Airlines (PAL) and Cebu Pacific (CEB) are mounting more domestic and regional flights to and from Boracay. PAL launched the Clark-Caticlan service in December and will have international flights out of Kalibo in 1Q2017. CEB will mount services from Seoul to Kalibo.