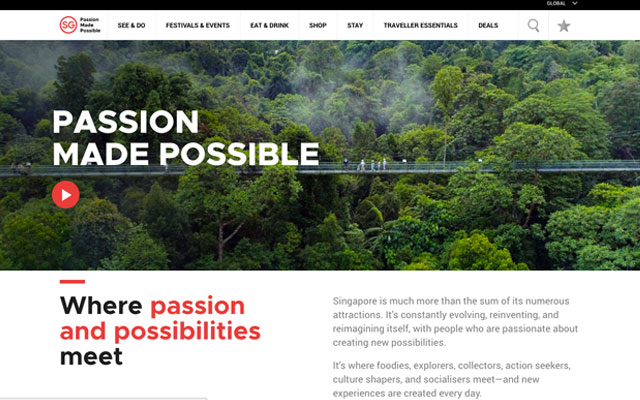 The Singapore Tourism Board (STB) and the Singapore Economic Development Board (EDB) have launched a unified brand,Â Passion Made Possible, to market Singapore internationally for tourism and business purposes.

The new brand is aimed at relaying â€śa fuller Singapore story beyond just tourismâ€¦ about this destination and its peopleâ€ť, said STB chief executive Lionel Yeo. It will be launched globally on staggered dates, starting with Singapore: Inside Out Tokyo on August 25. It will then be rolled out across Asia-Pacific and longhaul markets such as Europe and US from September 2017.

Beh Swan Gin, chairman of EDB, said: â€śSingapore is making the shift from being a primarily investment-driven economy to one that will be led by innovation.

â€śIn particular, local and international companies are seeking to create new products, services and solutions that will have a stronger impact in Asia. It is timely to send a strong and clear signal that companies can do this successfully from Singapore, and turn possibilities into reality.â€ť

In line with one of STBâ€™s key thrusts in its Marketing Strategy 2020,Â Telling a Great Singapore Story, theÂ Passion Made PossibleÂ campaign includes films and visuals featuring some 100 Singaporeans, residents and personalities, as well as tours developed by partner operators.

These will revolve around themes such as food, outdoor adventure, culture and industry. The latter theme, titled Progressor, is aimed at business travellers heading to Singapore seeking to connect, collaborate and innovate.

Features of this Progressor theme include a Made in Singapore tour conducted by Tribe, which will introduce travellers to Singaporeâ€™s industries, ranging from shipping ports to urban farms.

Developed after a survey of almost 4,500 respondents from 10 key markets â€“ Japan, Indonesia, Malaysia, China, India, Australia, US, UK, Germany and Belgium â€“ Passion Made Possible will also be incorporated into marketing campaigns and tradeshows by statutory boards and agencies under the Ministry of Trade and Industry.

STB has also relaunched its website,Â VisitSingapore.com, and will target its key markets via content partners such as CNN, National Geographic, BuzzFeed, Mafengwo and WeChat.

The number of international visitor arrivals in Singapore in 1Q2017 climbed by four per cent year-on-year to 4.3 million, reported STB.

With this development, the board is hopeful about meeting its projected medium-term growth rate of three to four per cent in international visitor arrivals, said Yeo.