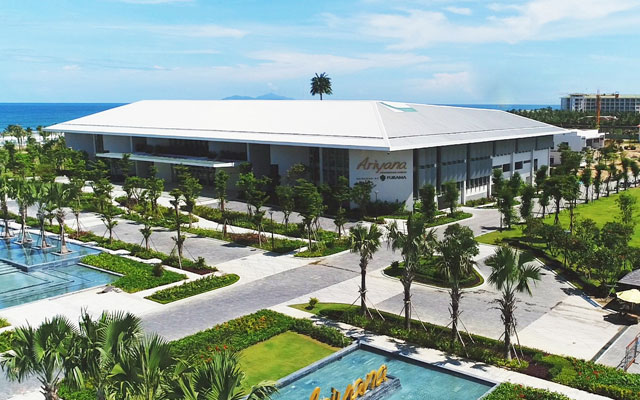 Vietnamese company Sovico Holdings is transforming the landscape of Danang’s beachfront with the expansion Ariyana Tourism Complex, which will in two years’ time welcome a 1,400-key luxury resort to support its new Ariyana Convention Centre, where a week-long series of APEC meetings and related events was held earlier this month.

The three-storey beachfront Ariyana Convention Centre, opened in mid-October, takes in 12 multifunctional rooms, three of which can be split into multiple spaces. The largest facility is the Ariyana Grand Ballroom, a massive 2,079m2 pillarless hall with a nine-metre-high ceiling that can seat 2,500 people in a theatre setting, and be divided into four smaller spaces.

Although the Ariyana Convention Centre is part of a bigger complex with hotel accommodation, Nguyen said it – as well as the “warmer, boutique-style venue” International Convention Palace – is marketed as a “standalone venue to be used by any event coming to Danang with attendees staying anywhere in the destination”.

However, there is no doubt that the 1,400-room Ariyana Beach Resort and Suite Danang, opening in two years’ time, will be a more convenient accommodation option for delegates attending events at Ariyana Convention Centre. Guests will enjoy complimentary tram and shuttle bus rides between the hotel and convention centre, with the journey taking no more than seven minutes.

“Ariyana Beach Resort and Suite Danang will be geared towards business travellers, and is meant to support big events coming to Ariyana,” Nguyen said, adding that next on the plans are upgrading works for Furama Resort Danang.

“In terms of key markets, we are keen on Singapore, Hong Kong and Australia,” Nguyen shared.

The team hosted a networking party in Singapore on Tuesday, with selected business event planners on the invite list. Following that, Nguyen has plans to head to Hong Kong, and to conduct a roadshow during AIME in Melbourne next February, and another in Sydney.

Besides high-profile APEC events, Ariyana Convention Centre has secured a tradeshow in March 2018 for an exhibition with 200 booths and conference for 900 people, and two incentives of 2,000 people each in May 2018 – one from the US and the other from Malaysia.

“These events allow us to exceed our (sales targets) for March and May,” remarked Nguyen.