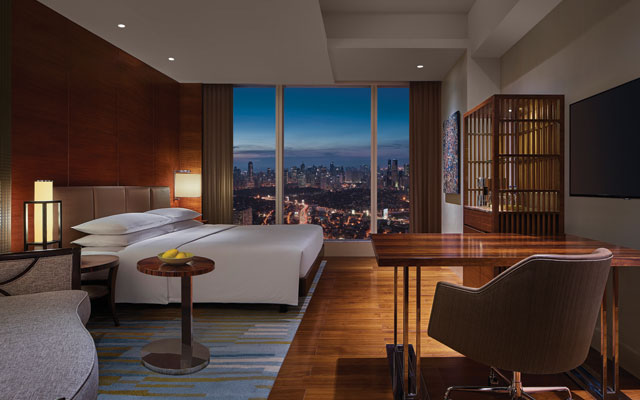 Located in Bonifacio Global City within the tallest skyscraper in the Philippines, this is the newest luxury hotel and the first-ever Grand Hyatt in the country. Rooms
The layout of the double room I was given was intended for business guests, where there was two of everything.

There were two separate luggage areas in the sizeable walk-in closet; two double-sized Hyatt beds with ample space in between; and two bathing areas. One had a shower stall while the other sported a shower and a tub, but each came with their own sinks, and separate toilet. There was also a circular glass table that double as a desk or dining area. Overall, the room felt spacious and relaxing.

MICE facilities
The hotel has over 2,280m2 of flexible space comprising several event venues, such as the pillarless jewellery-box inspired Grand Ballroom for 900 pax.

Clad in floor-to-ceiling glass windows which open out to an uninterrupted view of the skyline and Manila Bay sunset, the 1,190m2 ballroom also has a show kitchen; thereâ€™s even a chef who can sing and dance should you wish for a bit more flair for your event.

Instead of the usual scaffolding, the ballroom also features sky hooks or hanging points in the ceiling, where each can carry a ton of weight, meant to make the event venue more spacious.

Other meeting venues include the Grand Salon; the Apartments with a loft kitchen and beverage bar; the Garden Pavilion equipped with folding glass windows for an al fresco set up; the Penthouse; as well as seven VIP rooms in No.8 China House restaurant.

Other facilities
Recreational facilities include an outdoor pool on the 6th floor, a 24-hour fitness centre; and the Illume Spa. There are also currently six F&B venues, with one more, The Peak â€“ described as a collision of a grill restaurant, speakeasy, whiskey bar, cabaret, and a music lounge â€“ opening in 3Q2018.