Hong Kong's Ocean Park finally welcomed its first hotel more than four decades since its opening. Prudence Lui checks into this much-anticipated property to find one that is suited for families and corporate travellers alike 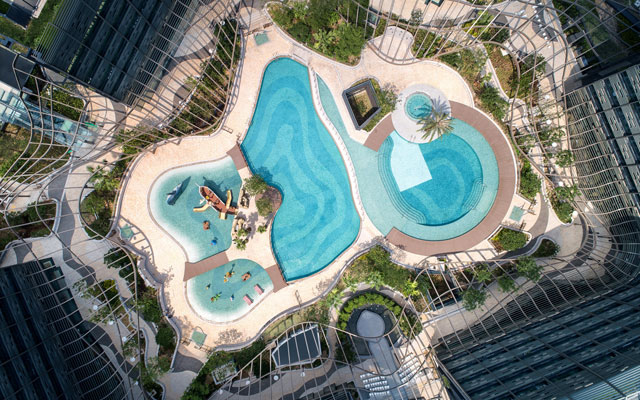 Location
Nothing beats its location.

The property is built right next to the entrance of Ocean Park and a stoneŌĆÖs throw from the eponymous MTR station. As footbridges connect Ocean Park Station to the hotel, there are no traffic worries, and it took me less than five minutes to walk the distance.

Since the MTR connection to the south side of Hong Kong Island debuted a few years ago, it offers visitors an additional means of access other than buses. Travelling time from Admiralty Station to the park now takes only four minutes.

The hotelŌĆÖs location is also close to hiking and jogging trails that lead through some of the Hong KongŌĆÖs finest coastline and country parks.

My daughter and I stayed in the twin-bed, 29m2 Premium Room of Marina Wing which overlooks the swimming pool. I loved the abundance of USB and electrical plugs on the walls, which came in handy for the numerous electronic gadgets I brought along for work.

However, it would be more convenient if there was an additional wall socket near the coffee/tea corner as I preferred to make my capsule coffee while boiling hot water simultaneously.

Also, the lighting in the room was bright enough, and a drum pendant light above the writing desk allowed me to easily read documents at night. Facilities
It was during the hotel’s soft-opening period when I stayed, so the Central Lagoon was not open yet (it just opened this week).

The landscaped 1,410m2 swimming pool has an upper pool for practice laps, as well as toddler and kid pools for families with young kids. Aside from the fitness centre that’s open 24-7, a Harnn Heritage Spa is expected to open on-site at a later date.

As a city resort hotel under Ocean Park’s umbrella, donŌĆÖt miss the signature 16m-high floor-to-ceiling aquarium that spans across three floors of the hotel.

For business travellers, the Club Wing is also home to the executive lounge, M Club, who offers a quiet spot for work and bites. Function spaces on-site include a 1,200m2 pillarless ballroom that can hold up to 80 banquet tables, two outdoor venues and two meeting rooms.

For large groups, a dedicated check-in area is provided. Corporate groups can also make use of a dedicated entrance to Ocean Park when staying in the hotel, while event planners can easily organise teambuilding sessions, educational programmes or hold themed cocktail sessions in Ocean Park.

F&B
There are four F&B options spread across the property. I stayed in the Marina Wing, with access to the 171-seater, all-day Marina Kitchen & Marina Caf├® and the 126-seater Pier Lounge & Pier Bar.

My Sunday morning breakfast at Marina Caf├® was spiced up by the appearance of two of Ocean Park’s characters, which I provided fun moments for both kids and adults lining up for the photo opportunity.

Service
Friendly and attentive. I only realised that I left my jacket in the room 15 minutes after checking out. I called up the hotel to check and within 15 minutes, I received both a call and email asking what would be the best way for me to collect my stuff.

Verdict
It is not only ideal for family and multi-generational travellers, but also for FITs and business travellers as the Club Wing offers elevated experience.