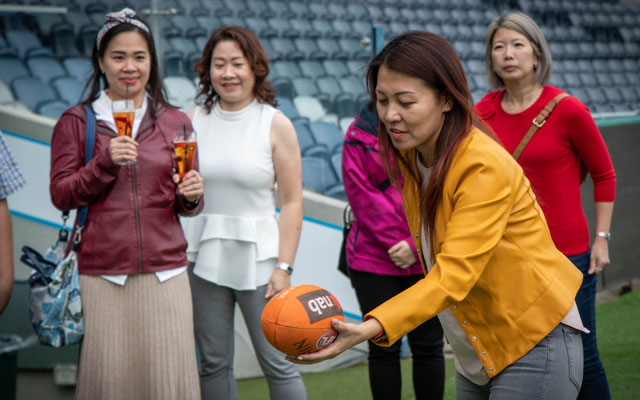 Melbourne is seeing a spike in incentive groups from Malaysia, and significantly more itineraries are venturing beyond the city for experiences, according to data from the Melbourne Convention Bureau (MCB).

Much of the growth can be attributed to the city’s combination of relatively new air routes, with AirAsia X flying directly from Kuala Lumpur twice daily into Avalon Airport on the west of Melbourne, and the offer of unique experiences. Malaysia Airlines meantime re-introduced extra flights to provide up to 17 services per week directly between Kuala Lumpur and Melbourne in apparent response to demand.

“The Malaysian market has matured tremendously (for Melbourne) in terms of reward trips,” said Kelvin Yin, MCB’s regional sales director for South-east Asia and India. “There’s no doubt about it; I think low-cost carriers have played a part in that growth, with more companies choosing LCCs and spending more money on ground arrangements (instead).”

MCB told TTGmice there’s been a 50 per cent growth in corporate incentive group delegates from South-east Asia over the last three years, with Malaysia proving the most popular source destination by far at 175 per cent, followed by Indonesia’s 34 per cent. Interestingly, almost 100 per cent of visitors have ventured beyond the CBD to engage in activities in regional Victoria. There were 16,000 new international visitors to the region in the last financial year.

In response, MCB is increasingly working with lesser-known regional partners to promote more areas to encourage repeat visitation, such as facilitating the first Asian fam programme led by a regional convention bureau for incentive agents last week, which was met by positive feedback.

“It was definitely an eye-opener for me,” said Lim Pei Pei, head of sales at Malaysian event management company ICEM. “They packed a lot of interesting places within our three-day programme but I’m very sure there’s even more (to discover) if we had more time.”

General manager for Malaysia’s Mice Vacations, Alex Chia, told TTGmice he has already received a number of enquiries for Melbourne next year, and that he expects the number of groups booked for the destination to exceed that of this year.

“I was surprised by the types of experiences available in regional Victoria. I think (many of our clients) would be interested in a swimming with dolphins experience, or staging a pop-up gala event at Flemington Racecourse (where the Melbourne Cup is held).”

Apart from Malaysia and Indonesia, Yin is keeping an eye on Vietnam as the next emerging market for Melbourne. Not only has VietJet recently announced plans for direct air services from Ho Chi Minh City to Avalon Airport in 2H2020, Yin added he is encouraged by the country’s economic growth and political fundamentals, and has plan to court the market soon.