The pandemic has made overseas retreats impossible but that has not stopped US-headquartered company MURAL from giving its staff a memorable experience. It made plans that were literally out of this world. 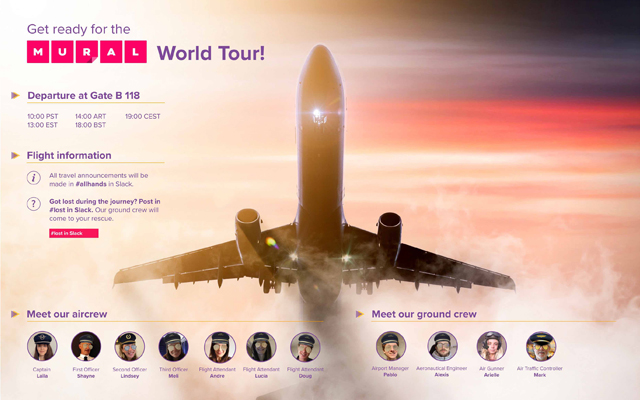 Event brief
In 2019, MURAL â€“ a global company that provides a digital workspace for visual collaboration â€“ held its annual company retreat in Argentina. However, in 2020 due to the pandemic, travelling to a destination was not possible.

Laila von Alvensleben, head of culture and collaboration at MURAL, was tasked by MURAL CEO Mariano Suarez-Battan to plan a virtual retreat for the companyâ€™s 250 global employees (at the time of the retreat). Headquartered in San Francisco, MURAL has offices in Buenos Aires, New York, and Brisbane, among others.

While von Alvensleben had planned many events prior, this was her first time executing a digital event of this scale, and she had only two weeks to pull it off.

The retreatâ€™s three main objectives were for the attendees to have a good time, to announce and celebrate the companyâ€™s raising of US$118 million in Series B funding, and to introduce employees who had not yet met each other.

Event highlights
The day before the event, attendees received an invitation in the form of a boarding pass â€” an image shared on Slack. The itinerary included flight information, photos of flight crew, and von Alvensleben as the flight captain.

Each employee could access a folder on a Google drive with images of everything they would need on the journey, such as Zoom backgrounds (e.g., an alluring beach), to help immerse attendees.

The journey kicked off with a Zoom background of a VIP lounge at an airline terminal. There, von Alvensleben welcomed them and revealed the itinerary for the day.

Employees would take a three-hour trip and â€śtravelâ€ť from snowy mountains to tropical beaches, before culminating in outer space.

At the snowy mountains stop, an icebreaker game was introduced, which saw 50 breakout rooms with three to four individuals in each. They had about 10 minute to ask each other a few questions, find out what MURAL teams they were on, and add stamps to their passport accordingly. In total each person entered two 10-minute breakout sessions, allowing them to speak to six other colleagues that they had potentially never met before.

At the tropical beaches stop, attendees hopped into four escape rooms built entirely in MURAL. There, they had to work together to gather clues to help them progress to the next escape room.

MURAL also sent participants physical party props â€“ such as sleeping masks and lip balm â€“ that were used throughout the event. These items could also be used after the event was long over.

A surprise element â€“ a band of MURAL employees performing a song â€“ was added to the schedule during breaktime. While it was pre-recorded, the vibe felt very much like a live music event, which had all but disappeared during the pandemic. For this, the crowd went wild.

Challenges
Planning and executing this alone was impossible, so von Alvensleben rounded up 12 volunteers to help her. For 10 days, they met virtually almost daily to brainstorm ideas, flesh out the trip, work on the agenda, and distribute tasks.

There was a glitch in one of the escape rooms, where organisers supplied an incorrect password. This resulted in no one being able to reach the last room, which made it a little awkward.

Ordering and shipping party props during the pandemic was no small feat either. It took a painstaking 15 hours of making orders on Amazon and getting them shipped to individuals. Von Alvensleben indicated she would have definitely outsourced this portion of the work if there was more time, to ensure she could focus on the actual event.

An inspirational speech was supposed to conclude the event, but the person in charge of delivering it had a connectivity issue and disappeared. While von Alvensleben took over, she did not know the speech as well. On hindsight, she would have ended the retreat with the bandâ€™s performance instead.