The Institute of Public Works Engineering Australasia 2021 (IPWEAQ21) is one of the first conferences at Cairns Convention Centre after the venue's extensive refurbishment, as well as one of the major, in-person events in the destination post-lockdown 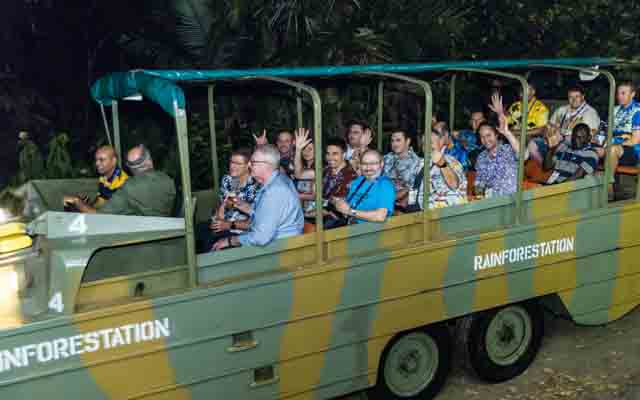 Event brief
IPWEAQ organises an annual conference in a different Australian city each year. The previous edition, IPWEAQ20, was held in Brisbane at the Brisbane Convention & Exhibition Centre.

IPWEAQ brings together those working in the public works sector across Queensland, Northern Territory and parts of New South Wales to share information and resources that enable attendees to deliver exceptional results, innovative projects and improved services for Queensland communities.

The 2021 in-person edition hosted 430 delegates from 49 councils and 124 organisations, as well as put up 60 trade displays.

The conference provided professional engineers, and those wishing to attain registration, the Continuing Professional Development (CPD) hours necessary to attain and maintain their registration.

Queensland is the only state in Australia that has a registration scheme for engineers working in the sector which requires compulsory CPD hours (150 hours every three-year period).

The Rainforestation Nature Park hosted the Tropical Night social function. It was a surprise, as delegates were put on buses not knowing what to expect; they were simply told to wear tropical attire. Under the canopy of the World Heritage-listed Wet Tropics Rainforest, delegates were welcomed with a Pamagirri Dancers Cultural Performance. That evening, food was provided in the form of roving canapes and dishes from food stations.

Delegates also got up close with dingoes, kangaroos, snakes and koalas with wildlife interactions a part of the event package. A twilight ride aboard a World War II-era six-wheel-drive, amphibious military truck, affectionately known as an Army Duck, also took delegates around to explore the nature park.

In the days prior, local Aboriginal artwork was displayed in the Cairns Convention Centre, culminating in an auction at Rainforestation Nature Park. Every year, IPWEAQ conducts a raffle or auction for its President’s Charity. Although a registered charity and not-for-profit itself, the IPWEAQ president nominates a charity for members to support during their term. From 2019-2021, president Craig Murrell selected Rural Aid, and during his presidency raised over A$18,000 (US$12,272).

Challenges
The event was held as Australia was emerging from lockdowns, which meant that there were many Covid-related restrictions to take into consideration – such as fitting delegates into conference rooms with ample social distancing, while function venues had capacity limits.

Mandatory check-ins at venues such as Rainforestation Nature Park were also implemented during that period, which meant that staff needed to be hired to handle the crowd.

There were also limited flights to get delegates to Cairns. In one instance, it took one keynote speaker, Richard Harris, over 12 hours to get from Adelaide to Cairns due to multiple layovers. A non-stop flight would have taken just three hours.

Regardless, the event was a success, as it welcomed the highest number of organisations and councils ever represented in the conference’s history. The highest number of exhibitors was also recorded during this event, so much so there was an overflow in the Cairns Convention Centre’s foyer.