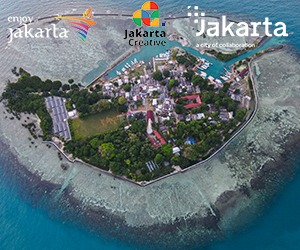 Brought to you by the Jakarta Provincial Government

The Jakarta Provincial Government is taking part in IT&CM Asia 2022 to strengthen the capital city’s position in the global meeting, incentive, convention, and exhibition (MICE) industry.

Head of Jakarta Capital City Government Tourism and Creative Economy Office, Andhika Permata, said that Jakarta as the center of Indonesia’s business and government has great potential for MICE tourism.

One way that cities in the world can recover post the pandemic is through MICE activities which can move the economic wheels and revive tourism industry after being severely beaten by the COVID-19 pandemic. It is believed that MICE sector could help the economy and tourism industry to quickly recover during the post-COVID-19 recovery.

Jakarta is the country’s largest business city which indirectly makes it as a MICE city in Indonesia while at the same time MICE sector has the highest potentials in Jakarta’s tourism.

The capital city has just officiated its new stadium, the Jakarta International Stadium, which is located in Sunter, North Jakarta. The stadium can also be used as a venue for various large events at the international and local levels.

The 9th Jakarta Marathon which will be held on Sunday 16 October 2022 expected to further develop Sports Tourism / Sportourism Indonesia on the world scene and restoring tourism jobs. The Jakarta Provincial Government has been supported the event since the first year of Jakarta Marathon in 2013. Considering that the City of Jakarta can always collaborate with events like this to further increase tourism promotion. The existence of JakMar further strengthens the positioning of Jakarta  as a global city.” Said Andhika Permata Head of Jakarta Capital City Government Tourism and Creative Economy Office.

Andhika said, “Other than being a business and MICE city, Jakarta also has various destinations in the leisure sector. And one of the leisure destination is the Kepulauan Seribu (Thousand Islands) area which is suitable for visitors who want to take a brief break from all the hustle and bustle in Jakarta”.

“Kepulauan Seribu is located only about 15 minutes from the Jakarta port where tourists can enjoy its natural beauty, which is comparable to other beach destinations, both locally and globally.”