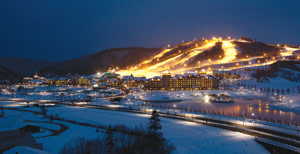 A convention bureau has been formed, underlining the South Korean province’s determination to make the most of its Olympic win. By Karen Yue

Securing the rights to host the 2018 Winter Olympics has not only catapulted Pyeongchang city into the global spotlight, it has also inspired Gangwon province, which the city belongs to, to begin courting international business events by establishing a convention bureau last year.

Pyeongchang’s win, which was announced by the International Olympic Committee in 2011, has already yielded a victory for Gangwon’s MICE industry – it hosted the 2012 International Ski Federation Congress and became the first Asian destination to welcome the event.

Although the Gangwon Convention & Visitors Bureau (GWCVB) is in its infancy, the province is no stranger to leisure tourism, insisted Jeongmi Shin, marketing team manager.

Nature lovers have crossed the globe to explore Gangwon’s three national parks – Mt Seorak National Park, Chiaksan National Park and Odaesan National Park – while history buffs have appreciated the UNESCO World Heritage Site of Yeongwol Jangneung. The Jangneung tomb of King Danjong is said to be one of the most beautiful royal tombs from the Joseon Dynasty.

Gangwon’s other heritage draw is the Gangneung Danoje Festival, which is recognised as a UNESCO Masterpiece of the Oral and Intangible Heritage of Humanity. Celebrated across Gangneung city in the fourth and fifth months of the lunar calendar, the religious festival’s roots go back over a thousand years and is today South Korea’s largest traditional festival.

Gangwon is also a favourite haunt for ski enthusiasts as it offers nine     major ski resorts, three of which sit in Pyeongchang.

“These attractions are popular (and) can cater to large groups of incentive and post-meeting tour participants,” said Shin, adding that Pyeongchang’s ski resorts are already attracting incentive groups from Thailand, Indonesia, Singapore, and Malaysia during winter.

Despite the province’s varied range of attractions, Shin said international corporate groups stay for only one to two days and these were usually for meetings, incentives and conferences. The lack of large exhibition centres has been Gangwon’s stumbling block in attracting the full spectrum of MICE business.

“Most of the other provinces in South Korea have mega exhibition centres, but not Gangwon. We do have plenty of (other) venue options though, such as museums, universities, and hotels and resorts,” Shin explained.

According to the Gangwon Provincial Government, the province has 37 hotels, 48 condominiums that welcome travellers, and 11 ski resorts. Several of these are equipped with event facilities. Currently, Yongpyong All Seasons Resort in Pyeongchang offers the largest venue in the province for corporate gatherings. It has 2,500 guestrooms, the Yongpyong Dome which can accommodate 5,000 people in two grand ballrooms and 19 seminar rooms, a 5,000-seat indoor gymnasium, a golf course, and 31 ski slopes.

Vivaldi Park in Hongcheon comes in at second spot with 2,446 guestrooms, 21 meeting rooms – the largest of which is the 1,386m2 Grand Ballroom – and various recreational facilities including a water park, a 13-slope ski resort, and a golf course.

Unique venues that can support conferences, meetings and seminars include Kangwon National University in the provincial capital, Chuncheon, which offers its convention hall for rent. The space can seat 200 pax in theatre-style or 150 guests in a banquet set-up.

Hallym University in Chuncheon is another option for corporate event planners. Its Ilsong Arts Hall offers a 78-seat auditorium and a 32-seat seminar room, while its Center for Aged Society Education has a conference hall for 88 people.

Gangwon’s closest options to a dedicated venue for conventions and exhibitions are the Donghae Mangsang Convention Center and ANGVA Donghae Expo Exhibition Hall. The former has seven meeting rooms, with the largest being the Grand Ballroom which can seat 350 pax theatre-style. The latter, built to host the 3rd Asia-Pacific Natural Gas Vehicles Association (ANGVA) Conference & Exhibition in 2009, has two halls.

Gangwon’s MICE capability is set to improve once the 2018 Winter Olympics draws to a close.

According to updates published on Olympic.org, several new winter sport facilities are being built in the lead-up to the games. They include a venue with figure skating and short-track skating facilities, an ice hockey stadium, and a speed skating oval in Gangneung, all due to complete by October 2016. Pyeongchang’s Alpensia Ski Jumping Stadium, meanwhile, is already operational, and was built as a legacy of previous bids for the 2010 and 2014 games. It sits within the luxury alpine resort of Alpensia and is supported by a range of quality accommodation including InterContinental Alpensia Pyeongchang Resort, Holiday Inn Alpensia Pyeongchang, and Holiday Inn & Suites Alpensia Pyeongchang.

Kim Jin-Sun, president and CEO of the PyeongChang 2018 Organising Committee, was reported to have said that all new facilities will have post-game uses. “We are developing various legacy plans. Most of the snow venues are privately owned and will be used as resorts and for sports. The indoor venues will be converted into gyms, school gyms, convention centres and leisure centres for the public,” he said.

Shin also pointed out that “there are plans to remodel the game facilities in Pyeongchang into a gorgeous exhibition centre”.

She added that efforts are underway to certify Pyeongchang as a convention city in South Korea.

Baa, baa, so many sheep!

Daegwallyeong Yangtte Sheep Farm which sits in Pyeongchang County, Gangwon is home to some 200 sheep. Popular with photographers, the sprawling ranch offers a scenic trail that runs 1.2km around the property. Visitors are invited to feed the sheep, and if they were to visit in March and April, they could see fluffy sheep being sheared for their wool.

For information on how this attraction can be incorporated into your programme, email Gangwon Convention & Visitors Bureau at igija0001@korea.kr.

Be on the borderline

Did you know that five counties in Gangwon are adjacent to the Demilitarized Zone (DMZ), a peaceful buffer zone between North and South Korea?

Underground tunnels in Cheorwon and Yanggu, the Unification Observatory, and the Dam of Peace in Goseong are all well-known tourist sites that serve as solemn reminders of the nation’s title of being the only divided nation in the world. In additional to its historic and cultural significance, the DMZ has also gained attention for its lush ecosystem, which has flourished ever since access to the area was restricted to the general public almost six decades ago.

Cycle down the ocean coast

Samcheok Ocean Rail Bike is an attraction that leverages the majestic views of the East Sea and its surrounding pine forest and rock formations. Visitors will cycle a four-wheel bike down a 5.4km double track along the coast. Rest stops are available at Gungchon and Yonghwa Stations, and visitors can explore an observatory lounge, an ocean tunnel and other attractions.

Plush toys, that is. The Teddy Bear Farm in Gangwon’s Sokcho chronicles the history of South Korea through the use of adorable teddy bears that are posed in scenes of recreated significant moments. There are also light-hearted scenes of teddy bears enjoying a pot of tea, at a birthday party, and building a snowman.

A taste of Korea

The Traditional Korean Food Experience Center in Pyeongchang, Gangwon is dedicated to preserving and promoting local food culture. Set in a traditional building, the attraction gives visitors a chance to indulge in hanjeongsik, a traditional full-course meal that originated from the royal palaces.