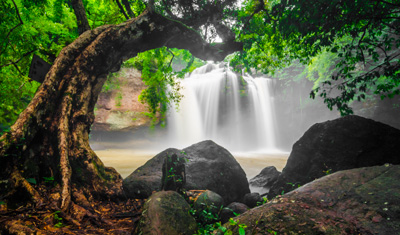 Khao Yai, known more for its lush national park, is one destination to watch for business events, thanks to a new convention centre and local suppliers who are joining forces for promotion. By Greg Lowe

The Erawan shrine bombing in Bangkok on August 17 had sent a ripple of shock through Thailand’s tourism sector, cost the country’s tourism industry 64.3billion baht (US$1.8 billion) and 1.33 million visitors, according to an estimate shared by the Ministry of Sports and Tourism in September.

Swooping in quickly to stem losses in MICE business, the Thailand Convention and Exhibition Bureau (TCEB) implements a series of security measures to ensure event planners and their attendees are safe and feel so. These measures include 24-hour assistance services at the TCEB Counter at Suvarnabhumi Airport, police escort for large groups of event attendees between the airport and the hotel, a dedicated MICE Lane at the airport’s immigration checkpoint, expense support for the engagement of security personnel for senior executives, and extra security support for general visitors.

And to regain confidence among travellers and business event organisers, TCEB has three campaigns ready for the 2016 fiscal year, from October 2015 to September 2016.

The second campaign, Thailand Connect … Connect beyond the Capital, incentivises event planners to explore different destinations in Thailand. Perks are offered for organising events in designated MICE cities – Bangkok, Pattaya, Chiang Mai, Phuket and Khon Kaen – although the extent of support depends on the fulfilment of certain conditions, such as group travel being conducted between now and December 2016 via domestic flights operated by an airline that is a marketing associate of TCEB.

The final campaign, Thailand BIG Thanks!, is aimed at drawing mega corporate events to the country. Budget support will be offered throughout the 2016 fiscal year. Backing this campaign is TCEB’s attendance at seven international tradeshows that specialises in business events.

Groups still considering Thailand may be won over by TCEB’s recent move to promote Khao Yai as an alternative or extension to Bangkok. Reports of surges in hotel occupancy from destinations such as Chiang Mai in the immediate aftermath of the attack showed that many people still wanted to visit Thailand even if they wanted to avoid the capital. And hardware developments in Khao Yai, to which the bureau took 31 media and buyers in July as part of the Thailand CONNECT The World fam trip, are adding to its appeal.

There are 184 hotels with a total of 7,024 rooms, according to TCEB. While many of the properties are small, there have been some key openings recently, including th e115-key Botanica Khao Yai. This hotel is supported by its older sister property, The Greenery Resort, which has 256 keys. The two hotels provide access to six restaurants and bars, some of which can be converted into events and meetings spaces. Groups of 40 pax or more can use the custom catering services.

The full opening of Scenical World, tabled for later this year, will see the arrival of Khao Yai’s first modern integrated resort.

This development has helped put the destination on the radar for MICE groups, opined Parichat Svetasreni, director of marketing and corporate image at TCEB.

“Khao Yai, is a new destination for meetings and incentives, especially for business travellers who want to stay in a nature place. With its close proximity to Bangkok, pristine settings, great variety of accommodation options and attractions, Khao Yai is becoming an emerging destination that can cater for corporate meetings, incentives travel, teambuilding activities, and pre- or post-show tours,” Parichat added.

While more work needs to be done to promote the destination, the development of facilities and attractions – including Farm Chockchai, Scenical World, Granmonte Asoke Valley and Farm Mor Por, as well as the likes of Midwinter Green and other large-scale dining venues capable of accommodating groups – has helped bolster the area’s offering.

Khao Yai is becoming more popular, especially with the domestic market who go there predominantly for seminars, as groups increasingly seek alternatives to beachside options near Bangkok such as Pattaya, which suffers from its sleazy reputation, or Hua Hin, remarked Tony Soorangura, associate managing director of NS Travel & Tours.

“People are bored with beach destinations like Pattaya and Hua Hin so they seek out something green,” Soorangura explained, adding that declining budgets for MICE groups makes destinations reachable by road from Bangkok increasingly attractive.

“During this period of economic downturn, groups tend to have less budget so they afford flights to remote areas,” he said. “Pattaya and Khao Yai attract groups for different reasons. Pattaya can be done in two days/one night while Khao Yai normally takes three days/two nights, which is a big difference in terms of budget for MICE clients, especially for very big groups.”

Khao Yai still faces a few issues beyond the three-hour drive from Bangkok, due to its popularity with the domestic market many local shops and some attractions are only open on the weekend. And the lack of destination promotion within the international trade means that many DMCs focused on long-haul markets remain lukewarm about its potential to compete with the likes of more established MICE destinations.

“There’s been a change in mindset among some of the properties here,” he revealed. “Ever since Botanica Khao Yai Resort opened I have been reaching out to the other resorts and attractions that are suitable for MICE groups. There’s now a much more collaborative spirit among the trade, we all know we can do better by collaborating in our efforts to promote Khao Yai as a destination for leisure and MICE.” The new Khao Yai Convention Center in one fell swoop placed the destination on the country’s map for both domestic and international groups.

The facility features two standalone buildings with a combined space of about 3,200m2, in addition to another 1,600m2 in the outdoor plaza which connects the two buildings. It can accommodate a maximum of 3,080 people at one time.

There are seven rooms for meetings and banquets, ranging in size from 128m2 to 240m2 and capable of accommodating between 40 (u-shape) to 200 pax (theatre style). The outdoor plaza can be used for cocktails, coffee breaks and other activities.

The two-storey Convention Hall houses the exhibition hall and the grand ballroom.

The ballroom, located on the upper floor, features 1,560m2 of flexible space which can seat 930 guests in a classroom setting and up to 1,300 pax theatre-style. It features 7m high ceilings and state-of-the-art audiovisual equipment. Since its opening the venue has been used for a number of events including live concerts with Carabou, one of Thailand’s most famous bands.

The ballroom can also be divided into three smaller spaces.

The exhibition hall offers 960m2 of space with a maximum capacity of 600 people, with an additional 954m2 of foyer space.

Khao Yai Convention Center makes a great option for event planners looking for alternative venues away from the busy Thai capital. There is no other modern meetings facility within a few hours’ drive of Bangkok besides Pattaya. I love the burgeoning art district of Silom and Charoenkrung and I highly recommend the regular gallery hopping nights (www.facebook.com/galleryhoppingbkk). On these nights, more than 10 galleries and art spaces stay open until at least 23.00, with special events to showcase both local and international artists. All the galleries are within walking distance or a short fun hop on motorcycle taxis or tuk-tuks.

My Sunday walk starts at sunrise, with a 5km walk from Mandarin Oriental Bangkok’s Sala Rim Naam restaurant to the majestic Wat Arun temple. The route is designed to give you a view of Bangkok’s most spectacular landmarks and temples, through the city’s historic streets. Lasting 75 minutes, the walk is adorned with classic colonial style buildings, temples, wet markets and even traditional medicine souks, affording a glimpse into the cultural riches and local life along Bangkok’s fascinating canal maze. You can also discover Bangkok’s 24-hour flower market, Pak Klong Talad, located in the city’s historic quarter.

For a business traveller with limited time, sightseeing in the capital is not complete without a visit to the city’s majestic temples. I recommend the Grand Palace followed by Wat Pho and Wat Arun. Avoid the crowds by visiting in the afternoon. Catch the Chao Phraya Express Boat from the public pier by Saphan Taksin BTS station at 14.30, reaching the Grand Palace by 15.00. Walk around until closing time at 16.00, and then onwards to Wat Pho to make merit at the biggest sleeping Buddha.  If you’re tired, have a Thai massage here.