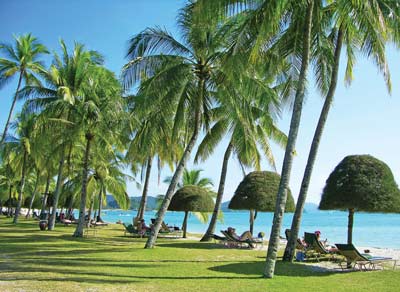 China was the darling for Malaysia’s incentive travel stakeholders in 2015, contributing 22 groups with a total of 17,409 delegates to the country’s tourism arrivals.

The strong performance has only served to whet the appetite of the Malaysia Convention & Exhibition Bureau (MyCEB) and inbound travel agents. Several initiatives were recently launched to promote the country as well as make its secondary cities more accessible to Chinese groups. Among the efforts is MyCEB’s move to establish an account on WeChat, a popular social media app among Chinese users.

Zulkifli Sharif, MyCEB CEO, said: “This initiative allows MyCEB to reach out and engage with industry partners who are frequent users of WeChat. To date, we have more than 600 followers with 95 per cent stemming from travel/MICE agents.”

Supplementing the bureau’s destination promotions is a stronger effort to improve air connectivity to take more Chinese deeper into Malaysia.

China Southern Airlines introduced thrice-weekly flights from Guangzhou to Kota Kinabalu on December 1, 2015. This was followed soon after by AirAsia which commenced a new daily service between Kota Kinabalu and Wuhan on January 22 and between Guangzhou and Langkawi two days later.

On the back of these new air links, business events stakeholders in Langkawi and Kota Kinabalu have stepped up destination promotions in secondary Chinese cities.

Ramizan said: “Langkawi is a new destination for China. Its UNESCO Geopark status, golf courses, good beaches, as well as water and jungle activities make it an ideal destination for meetings and incentives.”

He pointed out that efforts are made to target Chinese MICE buyers from all over China, not just from Guangzhou, “as there are also good linkages from Kuala Lumpur to Langkawi” which enable Chinese MICE travellers to visit the island via Malaysia’s main gateway.

As well, Sabah Tourism Board and Malaysian Association of Tour & Travel Agents Sabah Chapter have co-organised a sales mission to Wuhan in March to engage outbound Chinese agents. According to Ebony Leong, marketing manager at Sabah Tourism Board, the bureau is ready to provide non-financial support, such as welcome cultural performances, to Chinese planners.

While some of the new services are operated by low-cost carriers, John Chan, business development director at Kris International Traveltours, opined that improved accessibility is more important than the extent of services provided by the airline.

The new air links support Chan’s plans to tap secondary Chinese cities, such as Wuhan, Chongqing and Xi’an, for incentive business. He said companies in these cities are increasingly rewarding top sales staff with travel opportunities.

Meanwhile, China is expected to keep contributing strong numbers towards Malaysia’s MICE arrival targets this year. It welcomed a 12,000-pax Perfect China incentive group in March, brought in by Sunflower Holidays. The group, said to be Sunflower’s largest incentive movement this year, visited Kuala Lumpur, Malacca and Penang in batches between March 2 and 10.

This sentiment is shared by Winnie Ng, deputy general manager, Pearl Holiday Travel & Tour. She said: “There is more interest in the destination and the devaluation of the
ringgit certainly helps. We have a confirmed booking of 3,300 people from a multilevel marketing company from China and another group of 700 people.”

{Insider}
Iskandar Zulkarnain, director of sales at The Andaman Iskandar Zulkarnain, director of sales at The Andaman, recommends three activities that can be done on Langkawi island

Cruise down a mangrove river

Kilim Nature Park features a mix of well-protected green mangrove forests, isolated beaches and blue lagoons. A guided boat tour along the winding river will show delegates the flora and fauna that depend on the mangrove, as well as unique rock formations that are millions of years old. Visitors may also spot wildlife such as macaques and eagles.

Take a cable car to the mountaintop

The Langkawi SkyCab goes to the peak of Mount Mat Cincang, which offers fantastic panoramic views of the Andaman Sea and its surrounds. There are also walking trails and viewing platforms at the middle and top stations. With a length of 919.5m, Langkawi SkyCab is recognised as the longest free span single rope cable car in the Malaysia Book of Records.

Tee off on the greens

Langkawi has excellent, professionally-designed golf courses. Els Club Teluk Datai was designed by Ernie Els and it offers a memorable golfing experience amid a centuries-old lush rainforest with the Mat Cincang mountain range as a backdrop. The 18-hole Mount Raya Golf Resort was designed by Max Wexler and its location at the foothills of Mount Raya offers scenic views. The Andaman in Langkawi uses its unique location in Datai Bay to offer meeting planners and incentive houses a unique teambuilding programme.

At the heart of the programme is the luxurious resort’s Coral Nursery, a purpose-built facility near the beach. There, guests can learn more about the reef from Gerry Goeden, the head of marine environment at The Andaman.

Delegates can also snorkel, look at corals and learn how they sit within the underwater ecosystem. Teambuilding exercises include coral transplanting and building artificial reefs, invaluable activities that help encourage the reproduction of marine life and, in turn, create a more sustainable local fishing industry.

The programme to rebuild the reef was conceived in light of the 2004 tsunami, when the 8,000-year-old Andaman reef was adversely affected due to the destruction of thousands of coral colonies.

The Andaman’s general manager, Christian Metzner, said: “Multinational companies with headquarters in Kuala Lumpur and Singapore are increasingly looking for CSR (corporate social responsibility) programmes involving meaningful projects which can be incorporated into meetings and incentives. During the bidding process, this programme gives us an edge as it is unique to Langkawi and, I believe, is the only one of its kind.”

The Andaman also has a Marine Life Laboratory, a multipurpose indoor space at the lobby. The lab’s main function is to serve as a research area for marine science and biology students in order to increase their understanding of coral reef ecosystems and how to manage artificial reefs effectively.