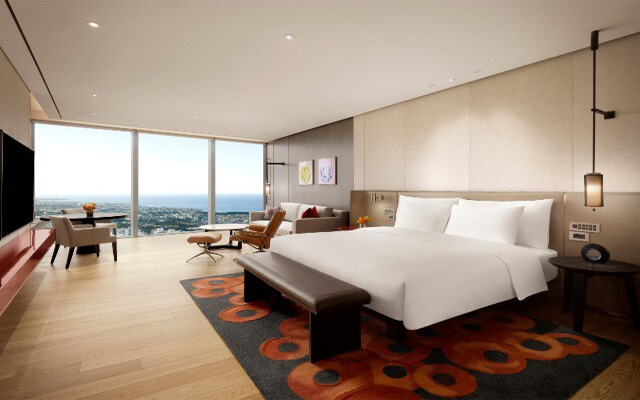 Hyatt Hotels has opened the 1,600-room Grand Hyatt Jeju in South Korea, billed as the largest Hyatt hotel in Asia-Pacific.

Part of the new Jeju Dream Tower, this opening also marks the return of a Hyatt hotel into Jeju, an island on the southern end of the Korean Peninsula.

There are eight meetings and event spaces on-site, and individual spaces start from 80m2, going up to 346m2 (a combination of three spaces). The 260m2 Presidential Suite is also ideal for private events and intimate C-suite meetings, and features two bedrooms, separate living and dining areas, a massage room, and sauna steam room, as well as dedicated butler service.

Meanwhile, the other living spaces start at 65m2, and boast floor-to-ceiling windows that open out to views of Halla Mountain â€“ the highest mountain in South Korea, the sea and the city. All come furnished with a 75-inch flatscreen TV and three-seater sofa.

Facilities include the Grand Club which suite guests have access to; the Korean Jjimjil Spa complete with red clay, cypress, ice and salt speciality therapy rooms; an indoor pool; and a 24-hour fitness centre. There is also a 4,290m2 infinity pool deck which features a heated infinity pool, private cabanas, a hot tub, a kidsâ€™ pool and a poolside bar.

Grand Hyatt Jeju also offers a wide selection of cuisines under one roof, thanks to its 14 restaurants and bars. Global cuisine choices include a Steak House, and a Japanese izakaya named Yumeyama; while Korean options include a farm-to-table Jeju Hot Pot, Noknamu Korean BBQ dining restaurant, and Pocha which offers authentic Korean street food culture alongside lofty views from the 38th floor.

The property is a 10-minute drive from Jeju International Airport, 15-minute drive from the port and cruise terminals, and within walking distance from shopping and culinary hotspots such as Jeju Dongmun Market and Nuwemaru Street.