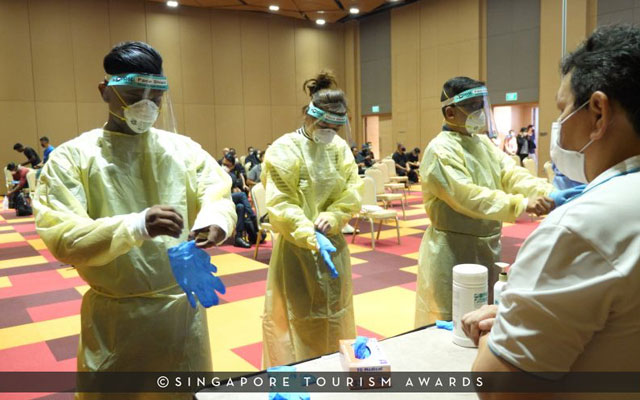 Thirty-four individuals and organisations which have shown extraordinary resilience by adapting their business models and products to the changing landscape of tourism amid the Covid-19 pandemic were recognised at the Singapore Tourism Awards 2021, which took place virtually for the first time on Friday (July 23).

Organised by the Singapore Tourism Board (STB), this year’s ceremony was graced by minister for trade and industry Gan Kim Yong. There were 77 finalists nominated across the award categories of Experience Excellence, Enterprise Excellence and Customer Service.

Xperience DMC’s Fascinating World of Aviation PLUS Exclusive Hangar tour was one of two winners of the Outstanding Tour Experience under the Experience Excellence (Leisure) award category, for presenting Singapore’s unique aviation history with a special focus on Seletar Aerospace Park.

The other winner was Tribe Tours, whose Chinatown Murders tour was recognised for its use of gamefication and storytelling to bring a precinct tour to life.

Messe Berlin and Milken Institute Asia Center were both named Outstanding Event Organiser under the Experience Excellence (MICE) award category. The former was recognised for testing the hybrid event prototype for safe business events with TravelRevive, while the latter for combining virtual and holographic components with an in-person event at the Milken Institute Asia Summit 2020.

Sentosa Development Corporation (SDC) was one of two winners for the Outstanding Marketing Idea under the Enterprise Excellence award category, which recognised businesses that displayed agility and innovation with new marketing campaigns to engage audiences despite the challenging environment.

The other winner, Skypark Sentosa by AJ Hackett (Bungy Holdings Singapore), was recognised for its No Scream Challenge campaign, where participants who resisted a scream got their next jump free, and those who screamed received an ice-cream treat.

Mandai Park Holdings and Resorts World Sentosa were each awarded the Special Award for Sustainability for their contributions to environmental sustainability.

Wildlife Reserves Singapore and Gardens by the Bay were each conferred the Special Award for Most Exemplary Employer for developing and implementing impactful policies to retain and retrain employees during the pandemic.

Marina Bay Sands, Resorts World Sentosa and SATS-Creuers Cruise Services & Star Cruises received the Special Award for Community Care (Business) for stepping up as leaders for positive change during the pandemic and displaying care and selflessness for the wider community.