The 14th United Nations Congress on Crime Prevention and Criminal Justice was held in a hybrid format in Kyoto this year, after being postponed in 2020 due to the pandemic. Kathryn Wortley finds out how the city dealt with Covid-19 concerns to host a successful outing. 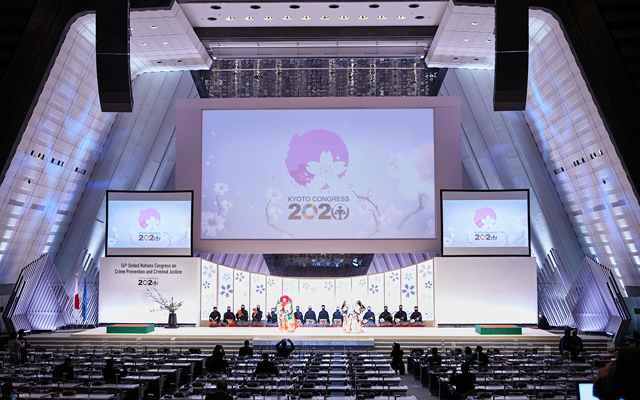 Event brief
The United Nations Office on Drugs and Crime has been hosting its congress since 1955. Held every five years, the event was due to be held in Kyoto in April 2020, but was postponed until March 2021.

Yoshiaki Matsui, deputy director of conventions and tourism at Kyoto Convention & Visitors Bureau, said the 2021 event â€śmarks only the second time Japan has hosted the event â€“ the first was in 1970 â€“ and both times have been in Kyotoâ€ť.

Kyoto was originally chosen as the venue because of its experience in hosting conferences for the United Nations, and governmental and academic bodies. When it was decided that the conference would have an in-person element, the organisers were confident that Kyoto could host the event safely and effectively, explained Matsui.

Event highlights
Kyoto introduced thorough countermeasures against infection spread as well as high-specification technology for online hosting. In addition to the formal proceedings of the congress, 13 special events and many ancillary meetings were held.

All attendees were able to experience Kyotoâ€™s history and culture. For those attending in person, the local business community offered activities while maintaining social distancing, including kimono dressing and koto (zither) performances. There were also traditional crafts and tourism booths manned by staff from local museums and certified interpreter guides.

Food and drinks were a key part of the hospitality. Bento boxed lunches, which guests enjoyed alone, were prepared in collaboration with nine local inns and restaurants that each prepared their speciality dish. Many kinds of dietary needs, such as halal or vegetarian, were also catered for. The renowned Uji green tea was served.

Challenges
Speaking of what the hosts had to overcome, Matsui said: â€śWe found a balance between following the pandemic rules, and being able to easily host the event in a high-quality way.â€ť

In addition to infection prevention measures such as social distancing and heightened ventilation, participants had a private transfer from the airport to the venue, and abided by a stay-in-place order that limited them to conference venues and their hotel. Seats at the venue were fixed and social bubbles were used to limit face-to-face contact.

Communication with attendees was emphasised. Attendees were asked not to shake hands or exchange business cards, a critically important custom in Japan. They were asked to avoid common touchpoints, such as doorknobs, by using their elbows.