Tight border controls means that Macau is still unable to welcome international events, but stakeholder confidence has not wavered, evident from the massive investments in resort expansions and new meeting hardware. 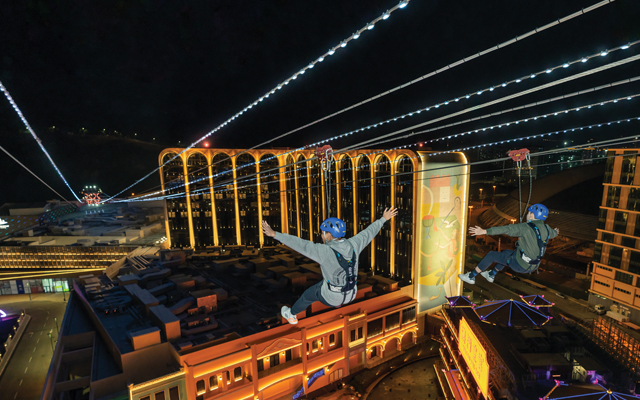 Macau is staying active in the business events scene, and continues to induct new event spaces, develop fresh attractions, as well as expand her stable of hotel rooms through property expansions.

One major project in the works is the Galaxy International Convention Center. The venue features a 10,000m2 pillar-less exhibition hall, a 4,000m2 conference hall, and a 16,000-seat Galaxy Arena for concerts and sporting events.

Directly connected to the convention centre will be the Andaz Macau, set to open soon with over 700 rooms and suites. Also in the pipeline is the 483-suite Raffles at Galaxy Macau.

All three builds are part of the Galaxy Macau expansion plans. Although construction has been completed, their openings will largely depend on how the pandemic situation plays out.

Once complete, approximately 900 hotel rooms will be added – one of which is a W hotel – alongside a state-of-the-art business events venue, and attractions such as the Super Fun Zone – a four-storey family-friendly entertainment facility – and an indoor water park.

According to a Macao Government Tourism Office (MGTO) spokesperson: “These new developments will provide Macau with the necessary infrastructure to work towards the goal of deepening “tourism +” cross-sector integration, including “tourism + MICE”, “tourism + sports”.

“This will take the city’s tourism industry to the next level, fostering related sectors and diversifying the destination’s offerings, to attract different profiles of visitors for longer stays and more spending.”

Earlier in April, MGTO also unveiled a promotional campaign – titled Experience Macao, Unlimited – which will sport different themes each month. The most recent theme in June was gourmet food, reflecting the Creative City of Gastronomy recognition by UNESCO.

A spokesperson from the Macao Trade and Investment Promotion Institute (IPIM) shared that the organisation will help planners to “enrich local itineraries” that revolve around various themes.

For now, as Macau patiently waits for borders to open, the various hotels continue to reinvent and revamp their offerings to stay competitive.

For instance, Grand Hyatt Macau has been revamping its F&B menus that utilise seasonal or organic ingredients due to the increased emphasis on wellness.

A hotel spokesperson added that the Grand Hyatt Macau also provides “hybrid meeting solutions” with the latest event technology for meetings as small as 10, up to large conventions of over 1,000 people.

The Londoner Macao, which opened in 2021, is also waiting to unveil its 6,000-seater multipurpose arena for big conferences and concerts, as well as a 1,700-seat Londoner Theatre.

For now, to capture the hybrid events market, Sands China has unveiled the Smart Stage at The Londoner Macao, an Extended Reality (XR) studio.

Within the 1,400m2 venue, the backdrop, floor, and stage lighting can all be customised, designed and operated to suit an organiser’s requirements, shared general manager sales and marketing at t the Sheraton Grand Macao, Cotai Central and The St. Regis Maca, Daniella Tonetto.

On the activities front, “many of the integrated resorts have begun diversifying and revamping their products to further differentiate themselves,” general manager for Hong Kong & Macau at global agency MCI, Olinto Oliveira told TTGmice.

In mid-2021, Studio City opened a waterpark which Oliveira opined will make a “big splash” with groups in the summer months. The resort is also home to Legend Heroes Park – the city’s first tech-based VR theme park.

Oliveira confidently stated: “Overall when the time comes for major events and conferences to return to the city, visitors will certainly be pleasantly surprised to find that the city has been hard at work ensuring that the destination continues to be a premier location for unforgettable experiences.”