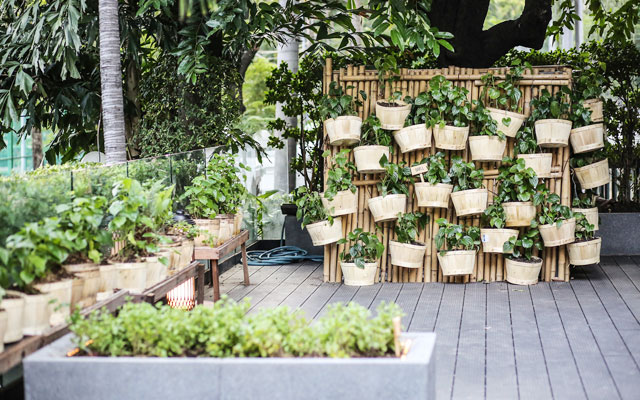 Hotel buffets and large-scale events such as conference lunches and gala dinners inevitably generate a lot of food waste, but Bangkok Marriott Marquis Queen’s Park in Thailand is employing various zero-waste tactics to change that.

For starters, the 1,388-key hotel hired a sustainability manager, Michael Riley, who joined the team at the start of this month. Riley’s first task was to oversee and improve on the reduction of food waste at Goji Kitchen+Bar – an effort first championed by the property’s executive chef Michael Vincent Hogan and senior executive sous chef Daniel Bucher.

Hogan shared that this food reduction movement began last year when Bangkok Marriott Marquis Queen’s Park started supporting Scholars of Sustenance (SOS) Foundation, a Bangkok-based organisation that collects excess food from hotels, restaurants and supermarkets, and delivers them to those in need across the city.

Such partnerships with SOS and various Thai farmers help to cut food waste that tends to end up in landfills, while creating a positive impact on the local community.

In addition, Hogan related how surplus food on the buffet line can be safely reused. For instance, leftover beef at the carving station becomes a stew, while its bones are boiled and reduced to soup stock. Meanwhile, croissants are morphed into bread puddings, while fruit skins are dehydrated for cocktail mixes. Other food waste is turned into compost for the hotel’s gardens, or becomes feed for various farms – oyster shells are ground into powder for chicken feed, for example.

The property also reduces its carbon footprint by sourcing ingredients such as pineapples, beef and fish locally, and self cultivates a variety of herbs from tarragon to mint from its two on-site gardens. One of the gardens also houses a troop of free-range chickens, a bee colony, while a vertical hydroponics garden indoors grows rocket leaves.

On why Goji Kitchen+Bar was the first F&B venue in the property to be targeted, Riley shared: “It is the main restaurant that serves around 2,000 covers a day, and would bring about the most impact in terms of food waste. Aside from Goji, we also try to reduce excess food during large-scale events like gala dinners.”

Goji is currently the test-bed, but Riley pointed out the zero-waste effort will eventually be rolled out to the other F&B venues. He shared that F&B team members at the other restaurants “have seen the benefits and have started various initiatives to reduce food waste too”.

Food is not the only sustainability issue on Riley’s mind. Eventually, he hopes to bring in compostable, food-safe bags for use in the kitchen, as well as introduce glass-bottled water in rooms. However, every step towards sustainability comes with a fresh set of challenges.

Riley explained: “Being sustainable is always more expensive, so one challenge is the cost factor for the eco-friendly kitchen food bags. The other problem, for the glass-bottled water, is finding storage space, because in comparison, plastics can be crushed easily after use.”

Aside from both the individual property and the entire hospitality chain’s efforts, Riley pointed out that changing the mindset of its hotel guests, as well as educating staff (despite a high turnover rate), is crucial.

“It is about finding the right balance that marries both business sense and sustainability because as a large hotel chain we can definitely make a huge difference in the world,” he said.