The expanding ARCHIDEX 2019 chooses to stay put with Kuala Lumpur Convention Centre and become the first tradeshow to enjoy the expanded facility. 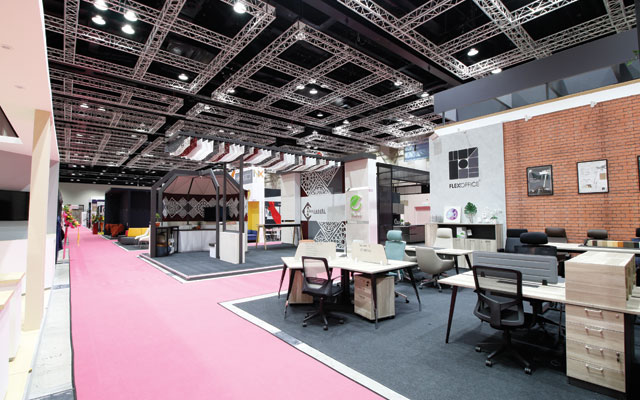 Brief
Held annually at the Kuala Lumpur Convention Centre since 2006, International Architecture, Interior Design and Building Exhibition (ARCHIDEX) has grown from 7,000m2 of exhibition space to over 30,000m2 in 2019. It involved 600 exhibitors (1,400 exhibition stands) from over 20 countries, and attracted more than 35,000 visitors.

Last year was also the year ARCHIDEX celebrated its 20th edition. In addition, the show was also the inaugural event to be held in Kuala Lumpur Convention Centre’s purpose-built and flexible 11,000m2 expansion. A new feature this year was the Innovation Hall at Hall 8, which also housed the Malaysian Institute of Architects Pavilion of Tomorrowland. It featured exhibits for the global futurist to explore the possibilities in architecture, and urban design for the future.

Meanwhile, Artwright, ARCHIDEX’s strategic partner, also unveiled the Office of Tomorrow in the Innovation Hall, which featured a concept that showcased state-of-the-art furniture aimed at utilising space and resources effectively to boost growth and productivity.

Challenges
It was key that the various contractors involved could meet the expansion’s completion date, as well as ensure the space was ready for the large-scale event.

Alan Pryor, general manager at Kuala Lumpur Convention Centre, recalled: “The completion date was also close to the start of the event, which threw up additional challenges. Particularly, the lack of preparation time for our team, the organiser, official contractors, freight forwarders and sub-contractors was limited, as the space was unfamiliar.”

To get around this, Pryor shared that the team worked “intensively” with various parties to ensure deadlines were met. Pre-event planning and numerous organisational meetings were also held over seven months, which resulted in a detailed plan with several contingency strategies to ensure that all parties understood their roles and responsibilities when it came to move-in and move-out. The close collaboration resulted in a seamless move-in and move-out process.

Another challenge was that both regular and new ARCHIDEX exhibitors and visitors were unfamiliar with the new space, and hence, it was important to manage visitor flow to the expansion halls.

As such, Kuala Lumpur Convention Centre worked closely with C.I.S. Network to implement ways to drive visitors into the expansion area, which included a new visitor registration location, eye-catching directional signage strategically located throughout the venue, and interactive activities in Halls 6 to 8.